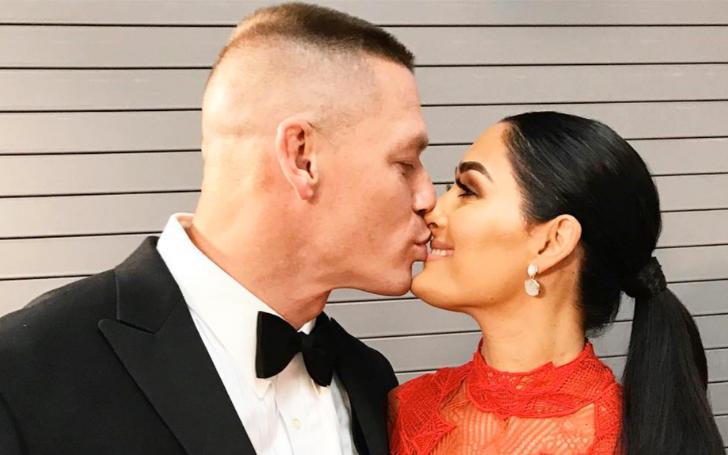 While the WWE superstar John Cena is flaunting in love with his gorgeous new girlfriend Shay Shariatzadeh, Cena's former wife Nikki Bella shares she's having difficulties getting over the highly-publicized breakup.

Both the WWE stars Nikki and John spent six years together before parting their ways. And both the longtime lovers has now found the apple to their eyes as currently Bella is in a relationship with her former Dancing With the Stars partner Artem Chigvintsev.

Despite sharing a special relation with Artem, Bella shared she still feels an extra special connection with the 42-year-old Cena.

Talking to the latest episode of Bella Podcast, the wrestling diva shared,

The one thing that I can’t tell you from my point of view and my emotions and my perspective, you know, I just towards the end started to become a miserable person.

Describing the final days of her relationship with the WWE superstar. Nikki shares, "I was very, very unhappy. I would ask myself questions every day. 'Why am I feeling this way?"

Bella further added some touching words saying John was the best thing that ever happened to her. "I have not only this beautiful, successful man, who has a heart of gold, who's an amazing person. I live in these gorgeous homes. I have these beautiful things."

The Total Divas star added that her new boyfriend and sister Brie Bella are her soulmates as well. Towards the end, the 35-year-old star concluded with some heart-warming words expressing unconditional love she holds for John and pitying 'lives didn't work for us'.

Ever since John and Nikki broke up, fans' hearts shattered hearing the tragic news of our favorite wresting couple parting away. But we are happy that Cena finally found the apple to his eyes.

We were initially introduced to the so-called 'mysterious girl' on March 27, 2019, holding hands with John in a restaurant in Vancouver, Canada, who happens to be an Electronic Engineer.

Nevertheless, nothing can change destiny, and it's pre-written words. All we can say is both John and Nikki to be happy and move on with what life has in store for them. Stay tuned and connected to find updates.