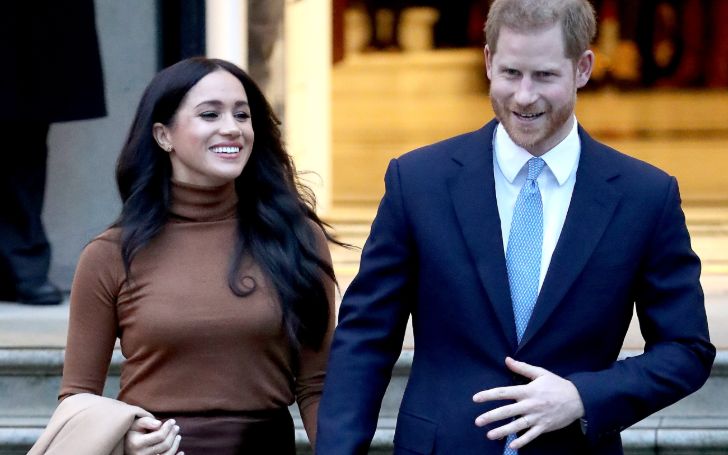 The Duchess and Duke of Sussex, Prince Harry and Meghan Markle, may move to LA in the near future, but not until Donald Trump leaves the office.

The young royal couple, Prince Harry and Meghan Markle have finally decided to pursue a life of their own and raise son Archie while being financially independent.

Former Actor, Meghan Markle was born in Los Angeles, California, to parents Doria Ragland and Thomas Markle. She is an American but admits spending most of her working time in Canada due to her role in the hit series 'Suits' in 2011.

In a shocking statement published earlier this week, the Britain couple announced stepping back as the senior members of the royal family.

The royal couple with their adorable son, Archie.
Source: Yahoo

The Sussexes mentioned that they want to work to become financially independent and plan to balance their time between the United Kingdom and North America.They are reportedly planning to launch their own Sussex Royal Foundation shortly.

For more information, follow up on Prince Harry and Meghan Markle Step Back as Senior Members of the Royal Family - Get all the Details of Ongoing Royal Drama

"It's by no means an immediate thing, but there is a long-term plan to end up back in the US with a second home in Canada, where they will also spend a great deal of time," the source said.

The 'Suits' star previously described President Donald Trump as 'misogynistic' and 'divisive' during his presidential campaign and requested people to vote for opponent Hillary Clinton. To that, the leader responded with, 'I didn't know that she was nasty'.

Donald trump and Melania Trump during state visit to the UK.
Source: NPR

The former actress denied to meet up with President Trump on his state visit to the UK last year as well. It's pretty clear from the royal couple's previous statement that LA is off-limits to their stay until Trump gets off the office.

Further on, Harry, 34, and Meghan, 37, promise to continue to honor their duty to The Queen, the Commonwealth, and their patronages.

On a recent update, according to the statement provided by the British Queen Elizabeth, "My family and I are entirely supportive of Harry and Meghan's desire to create a new life as a young family. Although we would have preferred them to remain full-time working members of the Royal Family, we respect and understand their wish to live a more independent life as a family while remaining a valued part of my family."

Now that everything seems sorted, we hope that the couple have a smooth life ahead.