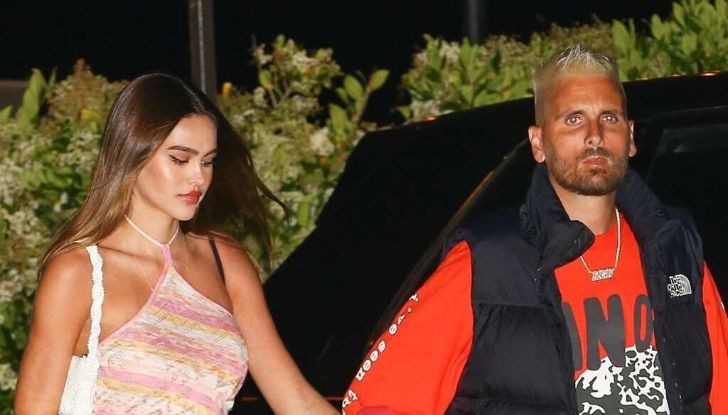 The trolls roasting Scott Disick for dating a teenager should take a break now. Disick, 38, celebrates his girlfriend, Amelia Gray Hamlin's 20th birthday. Hamlin, a model, shared some glimpses of her birthday celebration on her Instagram story on Tuesday, June 12.

The festivity took place in Miami at Papi Steak restaurant with a massive five-tier cake. Sources tell Scott put a diamond-encrusted cross necklace around Hamlin's neck, which brought her to tears. Adorned in a golden see-through dress, Amelia wrote: "the best birthday a girl could ask for."

Scott shelled out a diamond-encrusted cross necklace for Amelia on her 20th birthday.
Photo Source: US Magazine

Scott, who previously dated Kourtney Kardashian, started seeing Hamlin in October 2020. A source close to the couple told the US Weekly, "Scott and Amelia really do have so much fun together, they’re a great match because they both love to go out and party and are both very attracted to each other."

Disick and Hamlin made their relationship official in February while celebrating Valentine’s Day. Amelia's starry celebration has come just a month later they commemorated Scott's 38th birthday. Amelia posted a picture along with her beau with a gushy message.

"I'm so lucky to have met you, i love you," wrote Hamlin on her beau Scott's 38th birthday on May 26.
Photo Source: The News

She wrote, "Happy birthday, my love, thank you for being the most caring, loving special person on this planet. I'm so lucky to have met you. I love you." Before her, Disick dated Sofia Richie for three years. He shares three kids, namely, Mason, Reign, and Penelope, with his ex Kourtney.

An insider revealed, things have been running smoothly for the trio and that they get along just fine. "Amelia is not bothered by Kourtney," said the source. It further mentioned, “Scott and Amelia have been enjoying spending a lot of time together and hanging out with their friends.”