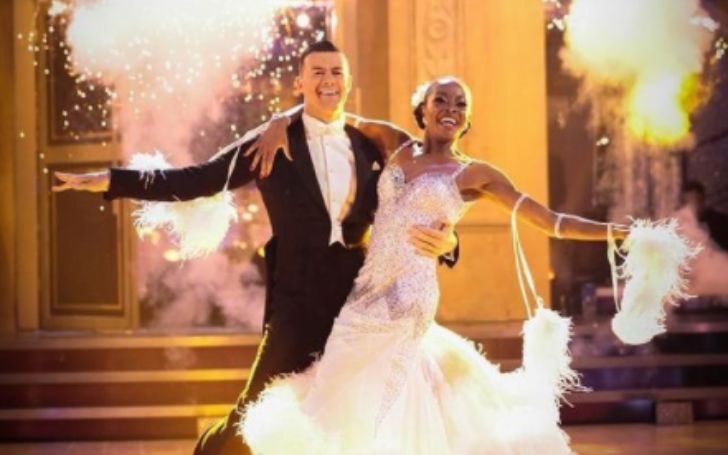 Strictly Star AJ Odudu And Her Dancing Partner, Kai Widdringto, Is Rumoured To Be Dating!

A British television presenter, AJ Odudu and an English dancer and choreographer, Kai Widdrington, who has been selected as a finalist on Strictly Come Dancing, is rumored to be dating each other. But, unfortunately, AJ has decided to drop out of the grand finale of the popular BBC dance show due to suffering a painful injury.

Back to back, the duo has been posting multiples of lovey-dovey snaps on respective social sites, which keeps their fans wondering about their relationship. The eagle-eyed fans are quite curious about whether they are just dance partners or have become a real-life partner.

Switching on AJ's Instagram this weekend post and captions pretty well seem to be lovely cations mentioning Kai. She states after being a finalist, "WE ARE IN THE @bbcstrictly FINAL! I still can't believe it. I want to thank everyone who picked up the phone or gave 3 votes to us on the weekend; we truly wouldn't be here without your support each week; it genuinely means the world to @ajodudu and myself."

Recommended: Miguel and his estranged Wife Nazanin Mandi Announcing their Separation After 17 Years of Relationship and 3 Years of Marriage

Cong to Kim's Instagram post he stated recently, "We may not be able to dance for the glitterball, but boy did we work our socks off to get this far. @ajodudu I truly am the proudest partner in the world, and Thank you for all the special memories that we now share."

In recent interviews, AJ and Kai opened up about their connection. AJ talked on their first meet, "I think from my point of view, I just felt as soon as we met each other, we were just on the same page. We both like to work hard, but we both like to laugh as well. We both have the shared goal, I think it's just those things that are the basis of a strong connection."

Additionally, Kai added, ''As soon as we started dancing together and had the first rehearsal, we just clicked. So everything started falling into place for the dancing."

AJ Odudu and Kai Widdrington are not confirmed publicly yet.
Photo Source: Instgarm

Moreover, they didn't mention much about what's going on in their private life, and their love lives are yet not confirmed. Unless AJ and Kai didn't confirm their relationship publicly, we could not say anything.

In simple words, AJ and Kai's relationship is still in shadow to today's date.

For more updates on celebrities, stay tuned with us in Glamour Fame.