The Skarsgard Family - Grab All The Unknown Facts Here! 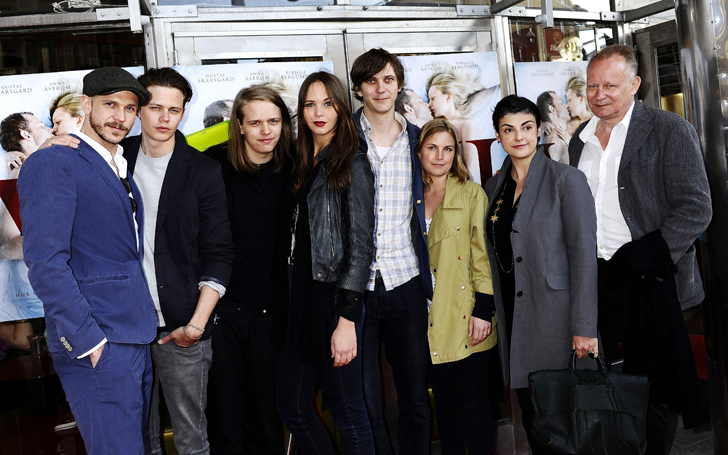 Power families are nothing new to Hollywood as there were power families in the movie capital of the world since the start of the industry. Fathers, and sons, and wives, and grandkids all walking the same path, set out by the elders of the family, and carrying the last name of the family.

One of such power family is the Skarsgard family. By this point, you know and seen at least one of the family member in a movie or a TV show. There are four people with the last name Skarsgard in the movie industry right now. The thing with power families are not every member of the family is talented or successful, but it’s not the case with the Skarsgard family. Alexander, Gustaf, and Bill Skarsgard are all successful in their own rights, and their father Stellan is the one who started it all.

Stellan is the patriarch of the family, and he is responsible for filling the world with as many Skarsgard as he can. Stellan married a physician My Skarsgard in 1975, and they had six children together, five boys and one girl, the youngest one being a boy. He did not stop there as after his divorce with My, Stellan married Megan Everett with whom he had two more sons Ossian and Kolbjorn. For those keeping counts, there are seven Skarsgard sons and one Skarsgard daughter.

Stellan was and is a free-spirited, free-thinking personality, and Alexander talked in lengths about how his bringing up shaped his future life. Alexander talked about how hard it was bringing a girl in the house because his father used to walk around the house with no clothes on. He said, “Dad was always walking around [without clothes] with a glass of red wine in his hand. They'd seen him [like that] a million times, but it got a little uncomfortable when you brought a girl over.”

The sons didn’t carry the enigmatic personality of their father, except Gustaf but they all did carry his genes as all the male Skarsgard are over six feet tall and the Stellan’s daughter Eija is 5’10 which is tall for a woman. Those are some real Swedish genes right there, everyone is beautiful, and everyone is enormous.

All the members of the Skarsgard family are famous, Alexander, Gustaf, and Bill are movie and TV stars, Eija is a model and the youngest of the sons from My, Valter, is also a budding actor. Sam is the only member of the family who is not famous as he followed in his mother’s footstep and became a doctor.

Growing up with five brothers must’ve been intimidating for a single sister, but as it turns out, Eija was the one who ran the whole house. Alexander talked about how there is still a handwritten note in their home in Sweden taped on the wall which says, “Girls are always right,” which she made her father right it down when she was two and a half years old. Eija didn’t go into acting like her brothers and father, and the brothers are making it up for all the members of the family.

Also Read: Lauren Ridloff: Everything You Need To Know About Marvel's First Deaf Superhero In The Eternals

The brothers, it seems, are slowly taking over Hollywood as they are everywhere. Alexander was the 'Tarzan', and he also starred in Big Little Lies as the abusive husband, Gustaf is channeling his father’s weirdness in the period action drama Vikings for History channel. Finally, Bill is making a name for himself as Pennywise the dancing clown in the movie IT and also starring in the hit Stephen King show Castle Rock.

Watch: The trailer for The Legend of Tarzan

Skarsgard’s are slowly taking over Hollywood. The whole family is like the acting Royal Family of Sweden, and the fanfare surrounding them is just crazy.

Growing up with an enigmatic father would be a weird thing, but his hands-off approach is what shaped the children for their future life. Stellan said he wanted the children to make their own decisions after the age of 16, which in turn taught them the lesson on responsibility. His decision to raise the children his way is what brought the family to the point where they are now.

With more Skarsgard coming from Sweden, be ready to gush at more of these boys as they carry their family’s name further into stardom and cement their place as one of the most successful power families of Hollywood.