home Entertainment Why Did Kyrsten Sinema Lock Herself Inside Bathroom? Details Here

Why Did Kyrsten Sinema Lock Herself Inside Bathroom? Details Here 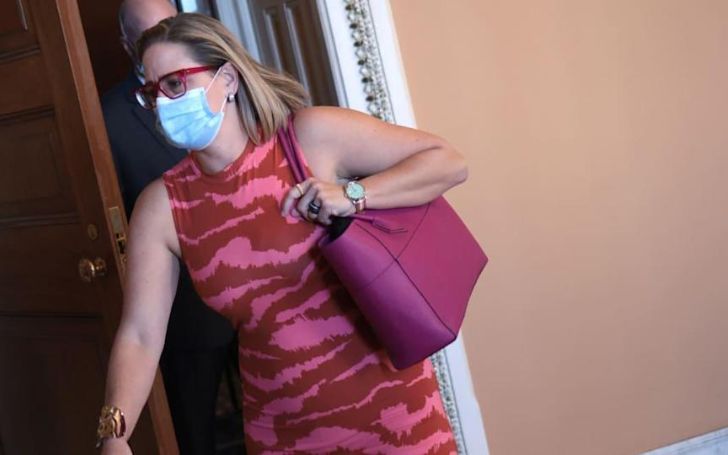 For what reason did Kyrsten Sinema Locks Herself inside the Bathroom? Here's the detail

Kyrsten Lea Sinema is a politician who was the first woman elected to the Senate from Arizona. Recently, she has been serving as the senior united states senator from Arizona since January of 2019.

Sinema is also the first openly bisexual and second openly LGBTQ woman to be elected to the House of Representatives and the Senates in 2012 and 2018, respectively. She rose to her rank for her continuous advocacy, support for causes such as LGBT rights, and opposing the war on terror.

Sinema is considered a moderate Democrat. Last Monday, Kyrsten Sinema came out swinging, aiming at activists who trailed her upto a bathroom. Let's continue with the details of this article.

Why Did Kyrsten Sinema Lock Herself Inside Bathroom?

Rage and annoyance over Sen. Kyrsten Sinema's refusal to fall in line with other Senate Democrats and pass legislation central to President Biden's agenda boiled over on Sunday. Moreover, not in the marble halls of the U.S. Capitol but ASU's Biden's bathroom in Phoenix, which is quite absurd.

Activists followed Sinema into a bathroom at Arizona State University, where Sinema is a lecturer, as they urged her to pass the reconciliation bill that she has held locked in negotiations.

As she was exiting a classroom at ASU's campus in downtown Phoenix, activists from the organization Living United for Change confronted Sinema. They told her that "we need a'"  'build back better" plan right now," invoking the name of the $3.5 trillion domestic policy bill that would expand the social safety net.

"Actually, I am heading out," Sinema told the activists as she walked into a bathroom. One person followed her into the bathroom, standing outside the stall that the senator entered, while another person stood at the entrance, recording the interaction.

"We knocked on doors for you," the person filming told Sinema while she was in the stall. A toilet flushed, and Sinema ignored the people as she washed her hands. She then walked back to the classroom as the activists chanted, "Build back better! Back the bill!"

Related: Trailer for 'Game of Thrones' Spin-off 'House of the Dragon' is Out Now

After Sinema's communications director rejected to comment on the confrontation, telling The Daily Beast, "W are not dignifying this behavior with a response," Sinema's statement on Monday blamed the activists for "deceptively" getting an audience with her.

“From the 19 years she has been teaching at ASU, she has been committing to creating a safe and intellectually challenging environment for her students,” Sinema’s statement read. “Yesterday, that environment was breached. My students were unfairly and unlawfully victimized. This is wholly inappropriate.

For more information and news on your favorite shows and films, stay tuned with Glamour Fame.