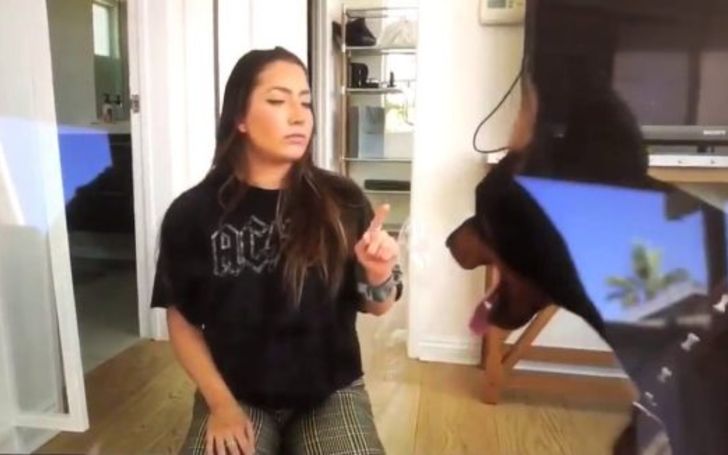 Brooke Houts is seen spitting and shoving her pup in the now-deleted video.

Youtube personality Brooke Houts, who boasts a massive 300K followers on her social media was accused of severe dog abuse after the star accidentally uploaded a video in which it seems Brooke is abusing her dog.

In the now-deleted video, the Youtube star says she is going to prank her dog, using a cling wrap, before which Brooke is seen spitting, shoving and slapping her pup.

People of the Internet took no time to respond to the situation and called the Youtube star a dog abuser; some users even went to report her to the Los Angeles Animal Services.

Responding to the situation, even PETA took to Twitter and posted a snap from Brooke's alleged video, followed by a caption which read, "DOGS DESERVE RESPECT.

PETA further added, "IF YOU CAN'T TREAT DOGS WITH KINDNESS AND INSTEAD HIT THEM, DON'T GET ONE. ATTN @YouTube: Please remove Brooke Houts from your platform."

PETA tried to get the attention of Youtube by mentioning them on their post, asking them to remove Brooke from their platform.

Amidst all, Houts also took to Twitter and addressed the whole situation, on her post, Brooke wrote, "I want to clarify that I am NOT a dog abuser or animal abuser in any way, shape, or form."

Brooke clearly declined all the allegations, but according to fans, it was apparent she abused her pup. The LAPD has not commented on the situation so far; an investigation is underway.