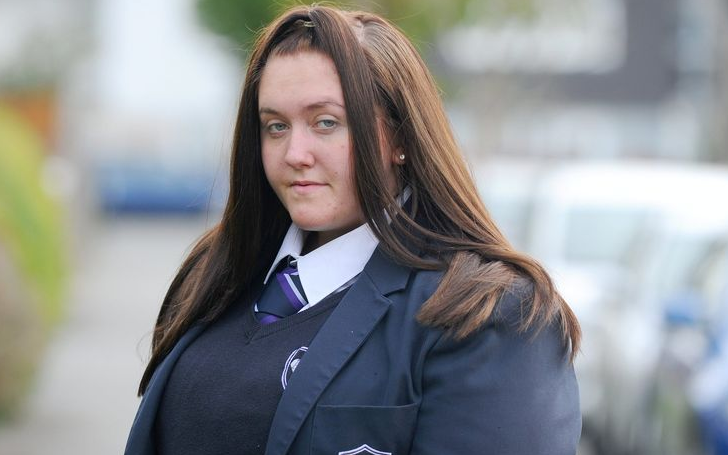 Kada Jones of Portchester Community School was removed from her classes because she is 'too big'.

The news came out earlier this month from Fareham, Hampshire. Apparently, a 14-year-old girl was stopped from coming school because she did not fit in the uniform.

Kada Jones comes back at school wearing her usual grey and size skirt which she wore last year without complain.

Kada wore a skirt which was similar to her school uniform.
Source: The Sun

But one of the schools in Fareham, Hampshire - Portchester Community School, stopped her this year said the skirt was not appropriate and removed Kada from classes.

Kada claimed her size doesn't allow to wear the skirt; the 14-year-old said, "I've been crying for the past five days - I don't understand, I've done nothing wrong."

She added, "People get put in isolation because they have done something wrong; they've been treating me like I'm not even a human being. All I want to do is go to school."

Also See: You Can Now Buy 'Scented Flatulence Pills' That Make Your Farts Smell Like Roses

Kada's mother, Carleen Jones, has been furious about the incident, she said, "Kada was in the headmaster's maths class last year, and he never raised an issue with her skirt."

Kada's mom, Carleen, was not very happy with the school.
Source: Mirror

Kada's mom added, "If she was dressed like a punk rocker or something I would understand, but this skirt is similar to the school ones and is absolutely fine."

Check This Hilarious Story, A Man Steals An iPhone and Posts a Picture On Victim's Instagram.

On the other hand, school's headteacher said the skirt Kada was wearing did not meet their school regulations, saying it was not long enough.

The headteacher, Richard Carlyle, said, "It's about the skirt being the appropriate length and appropriate material."

Richard added, "Miss Jones' skirt wasn't quite up to school regulations in terms of length, but the school is working to find a uniform that is compliant."