home Entertainment 14th July 2019 Will Go Down In History As One Of The Greatest Days In Sports!

14th July 2019 Will Go Down In History As One Of The Greatest Days In Sports! 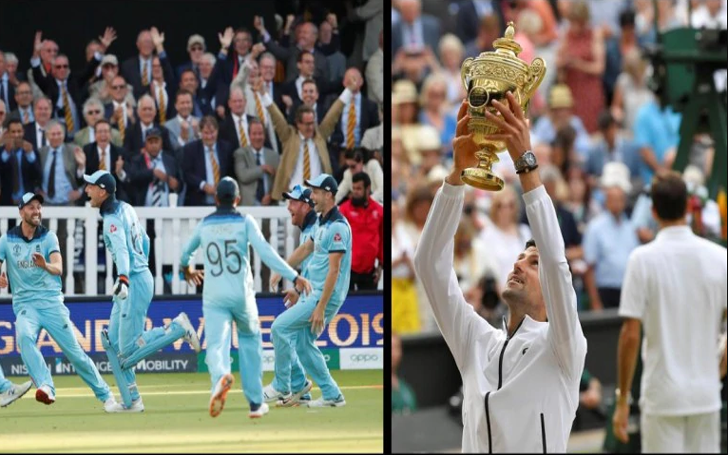 A single calendar year is riddled with multiple major sporting events, early spring to early summer is filled with soccer leagues, and tennis tournaments and golf Majors riddled here and there. Then early winter comes the football season as everyone heads to the gridiron to grind it out for the SuperBowl, and there are cricket events sprinkled here and there throughout the year. But rarely do the major sporting events final align on the same day, due to various reasons and the biggest reason being dividing the TV audience.

Well, on 14th July 2019 we got two major sporting finals on the same day, and wow it didn’t disappoint one bit. To start the day of England and New Zealand took the pitch to fight for the biggest title in world cricket. After the heartbreak at the FIFA Men’s World Cup, and FIFA Women’s World Cup, England was finally making a finals appearance, and the feeling in the country was, it was coming home.

Watch: The highlight of England vs New Zealand

And three hours later Roger Federer and Novak Djokovic made their way inside the All England Lawn Tennis and Croquet Club to duke it out for the trophy in the oldest tennis tournament in the world. Roger Federer was coming into the competition with the most Wimbledon finals win ever, and Djokovic was coming into the match with just five Grand Slams short of the total Grand Slam haul of Federer. This was going to be epic.

Watch: The longest Wimbledon finals between Federer and Djokivic

As New Zealand finished their inning and was about to post a target of 242 runs the match in the All England Lawn Tennis and Croquet Club between the two legends of Wimbledon. As people who sat down to watch both the events will tell you neither of the games disappointed.

England came out to bat, and Djokovic won the first set 7-6, as the English players came out to chase the 241 total registered by New Zealand. The climate was in favor of both the matches as London is notorious for having very fluctuating weather, but gods were looking down to witness one of the best days in sporting history.

As the match raged on at Lords the same was going on in the All England Lawn Tennis stadium. Djokovic and Federer were trading sets, and the game was shaping up to be a long and exciting one. As the Cricket final was winding down the match was turning into a nail biter, and England fans were getting Déjà vu as the same thing was happening again. The final over arrived and the last set was in full swing at Wimbledon as Federer and Djokovic were trading blows.

The last ball and England needed two runs to win and as the ball made its way to long on the players ran for two, but the ball arrived, and England was packed with a tied score. The same was happening in Wimbledon as the final set was tied between the two tennis greats.

We were heading for a super over and tiebreaker at the same time, people were watching on split screens. If you missed out on the two matches, we are really sorry for you because it was two heart-pounding moments at the same time. The final set was tied, and as Federer missed the last two shots, very unlike him, Martin Guptill couldn’t get his team two runs needed to win the final match as the English team won the final on boundaries.

The world was watching, and the two federations were even talking with each other on Twitter.

This was a once in a lifetime event like we said before, two major events happening at the same time is very rare, but the way the two events concluded was something for the history books. Twitter seemed to agree with the fact that this was something we had never seen before.

The way those two events concluded, people were glued to their seats, and no one was even taking a bathroom break. Sporting events always convey a sense of urgency and a sense of excitement, but this was beyond anything we as sports lovers have experienced. This was even more exciting than Tom Brady bringing back New England against Atlanta in the LI Super Bowl form 28-3 down in the third quarter.

This was once in a lifetime event, and people who sat down to watch both the events were treated to something they will probably never experience again.