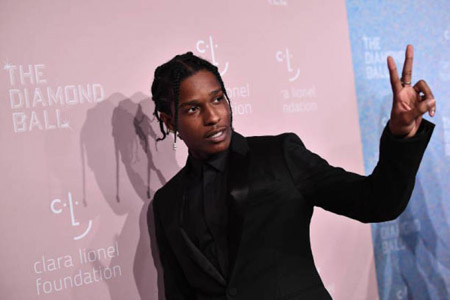 The trail for the alleged assault of a Swedish national by A$AP Rocky started in Stockholm District Court.

Three weeks since the rapper from New York was jailed for alleged assault on a Swedish national; finally, he sees his day in court. The rapper was taken to the Stockholm District Court where he was arraigned, and the judge set aside Thursday and Friday for the trial, but it is unclear whether the case takes the time which is allocated.

As the rapper and his lawyer made their way to the court and the judge presiding over the case started the day’s proceeding, A$AP Rocky’s lawyer entered the plea of not guilty and the lawyer claimed the rapper and his friend’s acted in self-defense.

The New York fashion icon and A$AP Mob member was saying self-defense, but the prosecutor took a very different route to explain the event which led to the confrontation between the rapper and his friends and their two stalkers. The prosecutor said the A$AP Rocky and his friends “deliberately, together and in agreement” laid hands and assaulted the alleged victim, Mustafa Jafari in Sweden’s capital.

The rapper was with his friends in the courtroom, but A$AP Rocky whose real name is Rakim Mayers was supported by his mother Renee Black who arrived in Sweden so she can be with her son and help him with moral support during this tough time.

The court proceeding was held inside a closed courtroom where no cameras or recording devices were allowed. Since this is a case of international interest, the court is trying to stifle outside influence. If found guilty, the rapper will have to serve jail time of two years, but Rocky maintained his innocence since the first day of his arrest, which was on 3 July.

The alleged assault happened on 30 July when the rapper and his crew were making their way home when one stalker started following them and after repeatedly asking the man to go the other way the man used his headphone to assault the bodyguard of the rapper. Then still the stalker kept on following them, and after reaching a junction the security guard again told the person to walk away, but he kept walking towards them with a clenched fist and a crazed look on his face. Two women well filming the whole incident when the women tell A$AP and his crew the guy was the one who groped her and her friend before he started stalking the rapper and his team.

After all the commotion and Rocky trying to quash the situation as we can see in the video, he is trying to make the person leave, and he is talking to them gently. After the talk is when the alleged assault happened, and the prosecutor is now saying in a 500-page report submitted to the court, the rapper and his crew used bottles to strike the alleged victim. Prosecutor is using blood-stained clothes and cuts on the victim’s body to say the bottles were being used, but that was not the case at all.

Martin Persson, A$AP’s lawyer, talked to the SVT, a Swedish broadcaster on Monday, saying he will present the court with new evidence which will show no bottles were used, and the fight was in self-defense with force used within the limit of the law.

The arrest was a big deal in hip hop community as everyone rallied behind one of their brethren and called this farce of an arrest precisely what it is, a racially biased attack on one of the most prominent members of the American music scene. Rapper Kanye West and his wife Kim Kardashian West called the White House to seek their help, and President Donald Trump talked to Sweden in favor of the rapper.

No matter what the Swedish government says, this is a damning case about race as rapper G-Eazy will testify. He was arrested in Sweden last year and charged with possession of cocaine and getting in a fight with a bouncer, but the white rapper was released the next day whereas in the case of the black A$AP Rocky he’s now spent 27 days in custody without being proven guilty.

We are all praying for A$AP and his family and his friends, and we hope he can come back home safe and sound without having to serve any more time than he unfairly already did. #JusticeForRocky