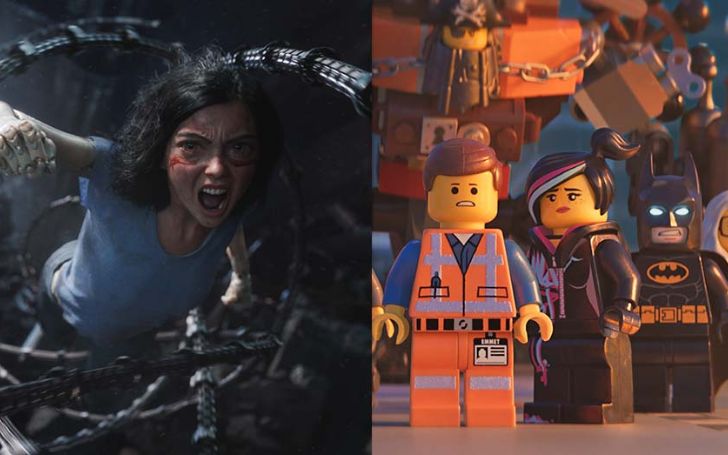 ‘Alita: Battle Angel’  is a fictional futuristic movie which narrates the story from the year 2563 where our planet Earth is devasted by a catastrophic war known as "The fall" and Alita is a humanoid who later joins the sport of Motorball, a battle royale race wherein cyborgs fight to the death.

Both the movies successfully hit the no.1 chart in the box office since the day of their premiere.

The cyberpunk action movie is an adaptation from Yukito Kishro's manga series Gunnm which was later revised by James Cameron and Laeta Kalogridis.

Check out: Jennifer Connelly "Excited" To Star Opposite Tom Cruise in The 'Top Gun' Sequel

The budget of the movie is estimated at around $170 million-$200 million. So far the movie collected Worldwide gross collection of $68.36 Million in 4 days, where $36.5 million was from the domestic box office and $31.84 million from International Box Office collection.

The movie is estimated to collect around $100 million in the president day weekend. Sadly, James Cameron produced movie Alita was not able to reach hit charts like Titanic and Avatar.

The movie is not able to collect revenue as expected but it has the possibility of overcoming its surplus amount.

The critic's review for the movie is below average as it has 59% Rotten Tomatoes reviews, 2/5 by Common Sense Media and 54% Metacritic review. 'Alita' is not making as expected though its animation, direction, and the story is admired by the viewers.

The movie recent gross on Feb 17 is $8.7 million and highest gross was at Feb 16, Friday, $11 million. So there is still a chance as the daily gross chart of the movie is inclining. So hopefully the movie grosses a accumulates good revenue as it deserves.

Mike Mitchell’s animated series The Lego Movie 2 grossed in top 1 position for 5 days from its initial day of release that was on Friday, February 8th, 2019. It was premiered in 4,3030 theaters with an opening gross of $9,061,120 million.

Similarly, the movie grossed $15,434,411 on its second day accumulating total gross of $24,495,531 which was quite good. The movie is distributed by Warner Bros in formats like IMAX 3D, Real 3D, and Dolby Cinema.

Check out: Avengers: Endgame Getting an Intermission Might be a Terrible Idea

The movie was made under a budget of $99 million, the most expensive Lego Franchise till now. The movie, however, has not been able to gather good review compared to previous Lego sequels. It was criticized as not being "fresh or fun".

So far the movie managed to accumulate the net worth of $45,925,359 and is estimated to collect $100 million easily. Though the associates of the movie are not satisfied with the gross income of the movie and said to put the franchise on hold for a couple of years.

The critic's review for the movie is quite good, it has 85% Rotten Tomatoes reviews, 7.2/10 IMDb and 65% Metacritic review. The production team recently announced to hold the franchise for a few years.

Find out: What Famous Celebrities Think of the Persistent Issue of Global Warming

Both the movies are grossing in a competitive way as there is not much difference in the numbers. The “Alita: Battle Angel” has only been in cinemas for the four days and collected a domestic box collection of $36.5 million from 3,790 theaters whereas "The Lego Movie 2" premiering for 10 days and collected $36.1 million from 4,303 theaters in its 4th-day run.

Alita is slightly ahead from the Lego movie 2 comparing both theoretical run and duration. Both the movies are estimated to cross $100 million within the President’s Day Weekend but that's not just enough because Alita and Lego both are a huge budget movie of $100 million and $200 million respectively.

Well, we sure hope they at the very least, overcome all the deficit, rather sooner than later.