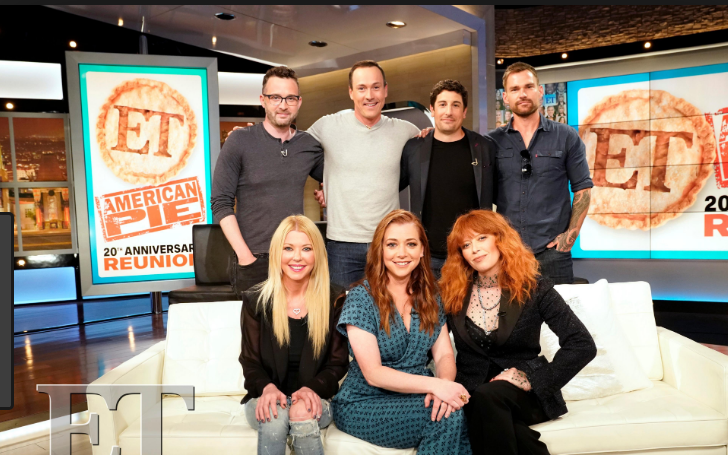 Alyson Hannigan posted a picture on her Twitter and wrote on her caption, "Happy 20th #amercanpie !!! #AmericanPie20."

Marking a 20 years milestone, the casts of the American Pie reunited to celebrate the movie's 20th birthday.

All the actors of the movie, the likes of Jason Biggs, Alyson Hannigan, Tara Reid, Natasha Lyonne, Sean William Scott, Chris Klein, and Eddie Kaye Thomas took an epic selfie together as they filmed a two-part reunion special.

Alyson Hannigan who played the character of Michelle Flaherty uploaded a picture on her twitter handle that was captured by Jason Biggs.

American Pie was a movie about a group of teenagers who made a pact to lose their virginity before graduating high school.

Five best friends, who are sexually naive, try to quench their sexual drive but end up in an awkward and weird situation.

The movie was released on July 9, 1999, and quickly became a cultural phenomenon, and most popular amongst teenagers and equally in adults.

On the occasion of the 20th anniversary of the movie, one of the most loved parts, the webcam scene was recently recalled by Shannon Elizabeth, who played the character of Nadia.

The actress dug deeper and talked more about the 'behind the scene' and explained how hard it was to pull the part.