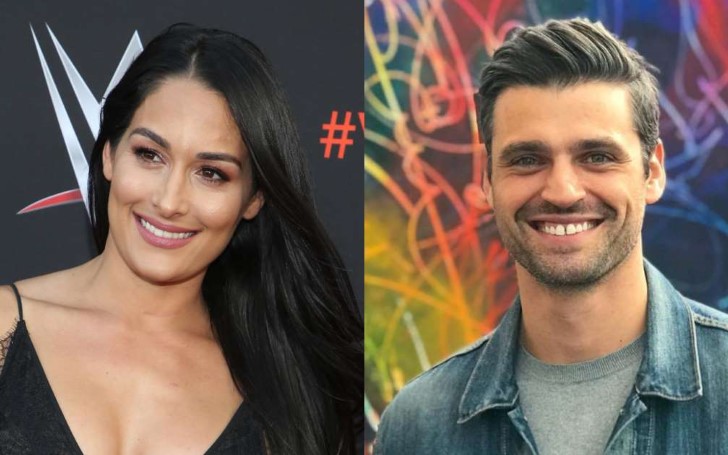 American professional wrestler, Nikki Bella is potentially off the market.

The wrestler, Nikki Bella is enjoying a romantic date with The Bachelorette star, Peter Kraus in the new trailer of the upcoming E! reality show, Total Bellas.

Both of them were seen sitting beside each other and chatting over wine. Eventually, Peter moved ahead to kiss Nikki. During the time Bella revealed that she hasn't kissed any other guy besides John Cena in nine years. 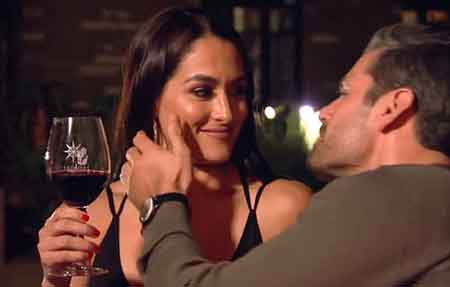 Due to the premier, they are speculated to be dating. They, however, are to yet to reveal. Before all these happened, Brie Bella revealed that Nikki was ok with her matchmaking. Brie told,

''Nicole gave me permission to set her up on a date. Alright, let’s see… Peter from The Bachelor!”

In the first place, the handsome competed in The Bachelorette, season 13 and ended as a runner-up. He competed to win the heart of Rache Lindsay.

After he honestly told her that he was not ready to give a commitment to marriage even if he wins, Lindsay chose Bryan Abasolo instead of him. Later, he was offered for the next season The Bachelor but denied.

Meanwhile, Bella had an on-off relationship with a popular wrestler, John Cena. The couple started dating in 2012 three months after Cena's divorce was finalized.

Bella revealed about their first date in a 2014's interview, where she told,

''On my best first date, there was a very big, handsome man with an amazing smile and dimples. He came to my hotel and picked me up as if we were in the same city and took me to a nice steakhouse. We just talked and chatted for hours … That first one went into the second one where we just had an amazing dance in the middle of the restaurant.''

The couple was having a good time and seemed to be in a good place as they moved in together in 2013.

Moreover, on 2nd April 2017, they engaged after Cena proposed her in front of mass in the ring after the mixed tag-team match at WrestleMania 33. Check out the video:

John gave Bella a 4-carat diamond ring which was held on by six prongs and set in white gold or platinum worth around $85k.

They were together for six years until the joint official account of Nikki and Brie broke the news of the split via Twitter.

We love you all ❤️ N pic.twitter.com/ooACLFXeMv

In April 2018, the former pair called off their engagement and canceled their wedding which was planned on 5th May 2018.

"After much contemplation and 6-years of being together, Nikki Bella and John Cena announced today their decision to separate as a couple."

"While this decision was a difficult one, we continue to have a great deal of love and respect for one another. We ask that you respect our privacy during this time in our lives."

The former couple used to display their fans lots of glimpses of their amazing relationship in the show, Total Bellas. However, they were not meant to be as it came crashing down this year!