home Entertainment Amy Robach Spotted Out in NYC with Estranged Husband Andrew Shue, Detail About their Affairs and Relationship

Amy Robach Spotted Out in NYC with Estranged Husband Andrew Shue, Detail About their Affairs and Relationship 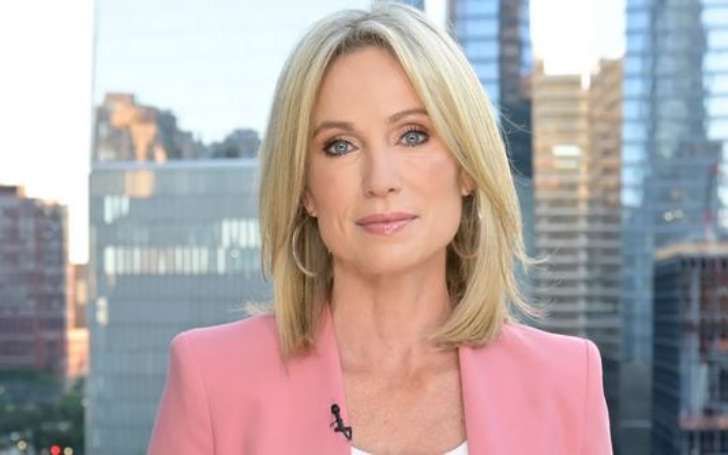 Amy Robach is an American news anchor and correspondent currently serving for ABC News. She has been affiliated with ABC news since 2012 and has great feedback. Amy is running two shows, Good Morning America and 20/20, and has greatly impacted journalism.

Previously, she was a national correspondent for NBC News and co-hosted NBC's Today. In 2020 she hosted Pandemic: What You Need to Know on ABC. Later she was removed from GMA3 after she was found having an affair with co-anchor T.J. Holmes. Now, let's find out more about her personal life below.

ABC's news anchor, Amy Robach, found massive limelight after being spotted in New York City with her ex-spouse. Amy and her ex-husband, Andrew Shue, met in the streets. During the meeting, both fitted in warm clothes and exchanged warm greetings.

It was an emotional exchange after Robach handed a family dog to her former husband. Their little dog has leashed a few feet away from the partner as they headed a sweet conversation on New York street. It was small talk, and they hugged each other and parted ways.

ABC's news reporter, Amy Robach, met her estranged husband, Andrew, back in April 2009 at the book party. Soon they were set up by their mutual friends and began a sweet relationship. The same month they were spotted laughing and kissing in Manhattan, walking hand in hand.

With great chemistry and understanding, they soon developed a sweet connection. In September of the same year, the two announced their engagement and surprised their fans. On 6th February 2010, after almost a year of dating, they exchanged their wedding vows.

Amy and Shue married at The Lighthouse, Chelsea Piers, New York City. Despite the snow, train delays, and high winds, every guest made it to give a blessing to the newlywed couple. An extra occasion for Robach was also seen there; after all, it was her 37th birthday.

The blonde beauty wore full gray during the ceremony while her former husband accompanied her with his brown tuxedo. They enjoyed the day to the fullest despite having a wedding night fight. Later the news anchor revealed that during the honeymoon, they recoiled.

Although the duo had an impressive marital journey of over a decade, they parted ways abruptly. After twelve years after their nuptial, Robach cheated on him with her co-anchor T.J. and they finally separated.

Andrew is a well-developed name in the world of acting. He is an American actor who is best known for his role as Billy Campbell in the series Melrose Place. Since 1984 he has been highly involved in the entertainment world and is giving his best to the business. His acting credits include Karate Kid, American Shaolin, Gracie, The Wonder Years, The Rainmaker, and so on.

Besides that, he is a successful athlete who played soccer for Bulawayo Highlanders, Anaheim Splash, Los Angeles Galaxy, and many more. In 1994, he married his first wife, Jennifer Hageney, a floral designer. They remained married until 2008 and finally divorced. Despite their split, they still share three sons from their marital journey.

The former beauty Pageant winner, Amy Robach, is now part of the headline with her new love life. After the split with her ex-husband, Andrew, she openly engaged in a romance with her partner, T.J. Holmes. Their undeniable on-screen romance in Good Morning America has also created a huge impact off-screen.

The duo has openly exposed their blooming romance, which many have indicated more than friends. The duo was spotted exchanging flirty gestures in various locations, including an Irish bar, and enjoying thanksgiving dinner. Although the duo hasn't confirmed much about their relationship, they are seen romantically enjoying quality time.

Additionally, they supported one another on social media, and Amy even stated that T.J Loves it when we match with a twin emoji. After several harsh comments, the journalist restricted comments on her Instagram account.

Journalist Amy has been married two times to date. Her first was Tim McIntosh, whom she met for the very first time in the early 1990s. After a great understanding of their relationship, they decided to take their relationship further. In 1996 after dating for several years, they finally accepted one another as lifelong partners.

The couple welcomed their first child, Ava Robach McIntosh, into the family. Later, she gave birth to their second daughter, Analise Robach McIntosh, in 2006. Two beautiful daughters are now twenty and sixteen years old, respectively. Despite the former pair having a wonderful love life, they parted ways in 2008.

Neither of the parties has opened up regarding their reason for the separation. Although the former Mr. and Mrs. McIntosh is no more together, they still take good care of their children like every parent.

Although Amy Robach has faced several ups and downs, her career is always upgrading with several miracles. She is one of the top hosts in the United States and charges a decent amount of remuneration. As of 2023, she enjoys an outstanding net worth of $50 Million, which she earned through her impressive career.

Most of her money is from her reporting career, while others are from her writing. She has authored Better: How I Let Go of Control, Held On to Hope, and Found Joy in My Darkest Hour and Better Together, which has impressive feedback. Amy wrote her first book after she got cured of breast cancer which she was diagnosed with back in 2013.

The former cancer patient is currently securing an annual salary of $3 Million. She is enjoying her job and life to the fullest. After a split with her former husband, Amy and Andrew sold their home for $5.2 Million, which they bought for $4 Million together.