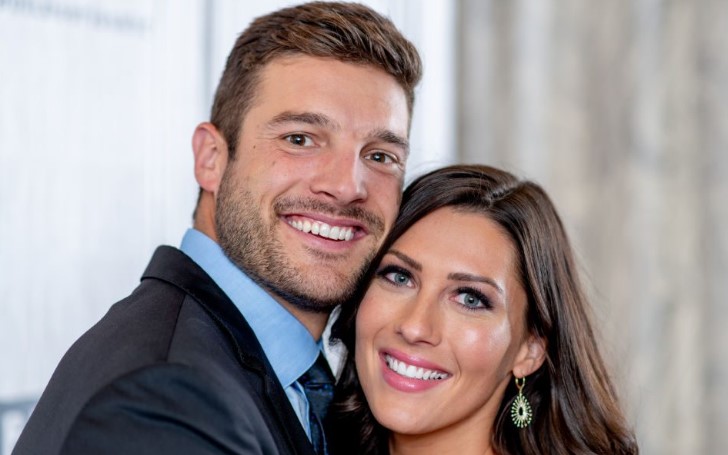 Becca Kufrin poked fun at her split rumors with her fiance Garrett Yrigoyen.

Becca Kufrin of  'The Bachelorette' has denied the split rumors with her fiance, Garrett Yrigoyen. While others would have lost their nerves, Becca, somehow, finds the speculations funny. And she came with a perfect idea to debunk all the rumors.

The reality star took to her social media and posted a video of herself with her fiance and their dog in bed, and wrote, "according to the social media, Garrett and I broke up because he was gone fishing over the weekend."

Even Garrett posted a video of his fishing trip on his Instagram and reposted Becca's Instagram video. One thing for sure, rumors came out from nowhere, because just last week Becca uploaded a picture of them fishing on a bridge.

So, it's bright people knew they were together just like but still split speculations surfaced. Maybe some fans failed to notice the two were having the couple's time, leading them to speculate they are not together anymore.

Becca and Garrett were engaged in 2018.
Photo Source: E! Online

So, people who thought they separated, rest assured, the couple is still together and doing just fine. Becca and Garrett got engaged during the season 14 finale of 'The Bachelorette' in 2018. The pair celebrated the second anniversary of their engagement.

All we can say for now is, all the best for these two lovebirds. May their love never fades in the days to come, and may they find the strength to weather every bad situation in their life.

You May Also Like: Meek Mill Faces Backlash Following His Urge to Stop BLM Protests