Check Out the Best Dressed Celebs at 2020 BAFTA Film Awards 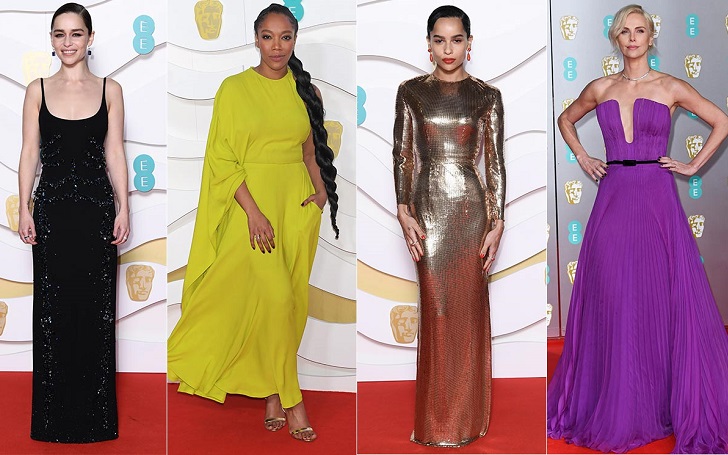 This year Hollywood glam queens donned their best attires at the British Academy Film Awards in Royal Albert Hall. From sleek black dresses to cotton candy pink gowns, exquisite Haute collections to re-wear, and recycle trend, there's everything in the whirlwind of the fashion industry..

The Royal Albert Hall welcomed the 73rd annual British Academy Film Awards to honor the commendable works on screen. The theme of the show was inspired by sustainable fashion.

Let's have a look at some of our favorite looks from the glamorous night red carpet.

The Duchess of Cambridge, Kate Middleton, made a statement with her Alexander McQueen gown from 2012, and her ever favorite clutch from Anya Hindmarch.

You May Also Like: Here's The Truth About Kate Middleton's Relationship With Meghan Markle

Naturally, it's a sin to re-wear the same clothes in the red carpet, but the Princess is not one for the leading stereotypes. Kate showed her persistence in wearing the best outfits more than once.

Also See: Charlize Theron Could Get Her Own Fast And Furious Spin-Off

Theron looked every bit of classy with her Tiffany necklace and her low bun and soft wavy curls.

The two-times BAFTA-nominated actress for 'Marriage Story' and 'Jojo Rabbit' Scarlett Johansson rocked the red carpet looking like the confident woman that she already is.

Johansson draped her pink gown with embellishment and frilly feathers.

The dress she wore was a simple yet structured with off-shoulder neckline paired with cuff bracelets.

Margot Robbie was nominated two times for supporting actress titles in movies, 'Bombshell' and 'Once Upon a Time in Hollywood.'

Also See : How Much Is Margot Robbie Net Worth? Get All The Details Of The Actress' Salary, House, Cars, Earnings!

The 'Suicide Squad' actress stepped on the red carpet in a flowing black gown with lace sleeves and a peplum waist from Channel.