Blac Chyna Tattoos and Their Meaning 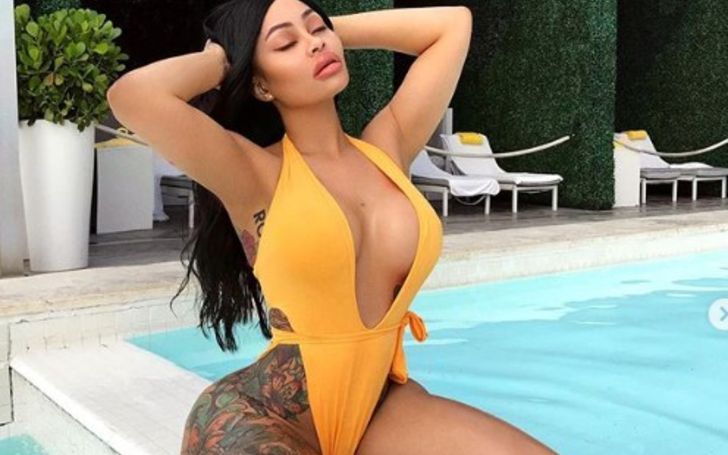 Blac Chyna, whose actual name is Angela Renee White, is an American model and entrepreneur who is well known for her make-up brand Lashed and her beauty salon, which is located in Encino, Los Angeles.

However, Chyna is not only famous for her career; there are lots of things that make her appear in the media from time to time. One of those is her remarkable tattoos.

Yes, like most of the celebrities, Blac also tatted most of the part of her body, which is quite famed in the mass. According to her, she got a total of sixteen tattoos till now. On this page, we has presented some prominent tattoos and their meanings inked by Blac Chyna. So stay tuned until the end of the article.

She Tatted Her Ex-Boyfriend Name Both Right and Left Elbow

The owner of Lashed, Blac got two tattoos in each of her elbow.
Photo Source: Steal Her Style

Like we mentioned, Blac Chyna is kinda popular for many causes of which one is her tattoo. Except for that, she usually became the headline for many news for her relationship with celebrities. Therefore, she also dedicated certain numbers of symbols in her body to her ex-boyfriends.

Chyna inked the name "Jay" with a small heart on her left inner elbow. She dedicated that tattoo for her ex-lover, Almighty Jay, who is a member of the American hip-hop band YBN, Young Boss Niggas. Blac dated the guy for some time; later, the ex-pair got separated.

Another tattoo Chyna tatted is "Stevenson," which is the surname of her ex, Tyga, and their son King. Yeah, people she also dated the American rapper, Micheal Ray Stevenson, aka Tyga. The former couple began to date after their first encounter in his music video, 'Rack City.' They were in a relationship for around three years and later on broke off when Tyga choose Kylie Jenner over Blac.

King, Future and Dream Tattoo in Her Hand

Mother of two, Blac Chyna, got three tattoos inked in each side of her hands. She inked "King," name of her first son with her ex-lover Tyga.

Chyna dedicated couples of her body tat for her children.
Photo Source: TMZ

On the other hand, Blac used to have a tat "Future," another ex-boyfriend. She covered Future tattoo with her daughter name "Dream," Dream Renée Kardashian who she gave birth with her former lover Rob Kardashian.

Blac Chyna colored her beautiful hands with a Henna Design and Tribal Tat, which is quite an eye-catching. In her right hand and wrist, Blac inked a beautiful Henna Design tattoo in red, which is actually sketched there to cover another tat devoted to her ex, Tyga.

Subsequently, Chyna also tatted her left hand and wrist with an intricate tribal tattoo, which is also colored red with the name "King," her firstborn son. She inked those tat, in 2012, after a couple of weeks after King birth, so her left-hand tribal tattoo goes to her son, King Cairo Stevenson.

Blac Chyna Inked Several Tattoos in HER Leg and Back

One of the poplar tattoos, Blac Chyna, tatted in her leg, is the word "Pussy" on the outer side of her right ankle. Most of Blac fans might be aware that during her young days, she used to work as a stripper for living. As a result, she got this particular tat to honor her lady bits and for women empowerment.

Like her right ankle, Chyna has also inked her left ankle with a small tattoo, two letters, "BC," which is initials for her name Blac Chyna.

Also See: Obsessed With Tattoo? Check Out These 10 Weirdest Tattoos That Will Make You Think Again

Further, she filled her left calf with a long vine of flowers of various colors which reaches up to her foot near a yellow butterfly tat. Though the actual meaning isn't explained in any media, Blac might want to reflect beauty through her flowers and butterfly tattoo. Subsequently, she even tatted another "small butterfly" in her right foot, which might be to indicate her love for beautiful things.

Blac tatted beautiful flowers in each side of her stomach.
Photo Source: Glamour Path

However, Chyna leg tats don't stop there; she inked couples of more tattoo of various flowers in her remaining parts. In her right thigh and hip, she printed a massive tat of "lilies with colorful patterns."

She got couple of bold tattoo in her body art.
Photo Source: Daily Mail

Similarly, Blac contains a portrayal of a enormous "Chrysanthemum flower" on her left ribcage below her "FUCK" tattoo, which is imprinted on her armpit. She even inked more "flowers and butterflies" on both corners of her stomach and in her back to cover her previous tat.