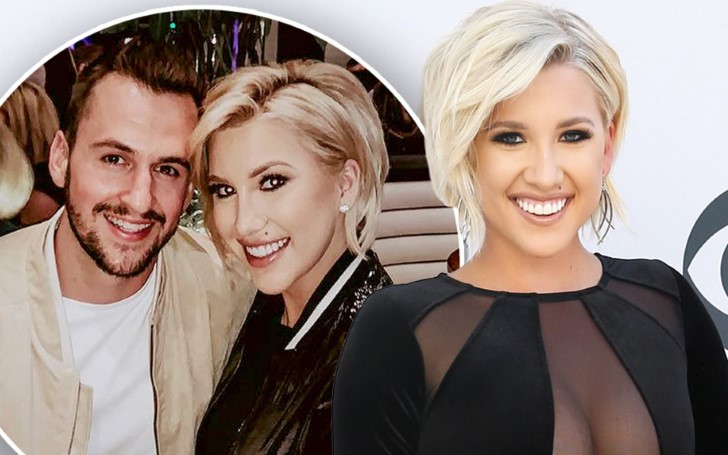 The Chrisley Knows Best Star Savannah Chrisley is now engaged to be married to Nic Kerdiles!

The 21 years' old star Savannah Chrisley has revealed that her National Hockey League partner Nic Kerdiles popped the question on Christmas Eve 2018. According to People, the 25 years' old pro hockey player proposed Savannah in front of close friends and family at Chrisley's home in Nashville.

Well y’all...we did the dang thing!! 😍😭 Never in a million years did I think I would be this young and have found my forever person. You are the best decision I have ever made. You love me through all my flaws and imperfections. I’m so glad I didn’t settle for less because now I have everything I could want in a man and more. You know how to handle me. You know what I need when I feel like my world is in crumbling. You know how to make me smile on good days and bad days. You always listen to what I need to say. You support my decisions. You motivate me in whatever I’m doing. You love me unconditionally but more importantly, you respect me. How do you do it? I know it's not easy all the time (let’s be real...most of the time) but I appreciate you more than you could ever imagine!! I love you ALOTTLE 😂 I can’t wait to be your wife 🥰 photo creds: @nicolebalsamophoto

On Wednesday, April 3, Savannah opened up about her love for her fiance and the engagement she had on the Christmas Eve. She said,

On the night of the engagement, Nic's family was in town and my whole family was there and we were filming and I was furious.

The lady wanted to have some privacy but, though it was Christmas Eve, there were people filming them.

Chrisley continued to state that her mother took her to the store saying she forgot something but there was no one there.

Our best friend's kid Dylan goes, 'Hey I think they're looking for you outside.

As she walked outside, she was wonderstruck as the alley was lit up. Nic's family was on one side while Chrisley's family and friends were at the other.

Nic asked Savannah to come closer and he forgot what he was gonna say. This made the moment much cooler for the fiancee.

The duo engaged with a 5-carat ring with 18 round brilliant cut diamonds designed by Dror Flanzman in Nashville. Savannah says her mother Julie Chrisley picked out the ring and helped Nic.

According to Savannah, her fiance Kerdiles and her father, Todd Chrisley also had a chat before the proposal.

Link is in my bio! #chrisleyconfessions episode this week is definitely heartfelt and emotional. The link is in my story!

Chrisley furthermore joked about how nervous Nic was when he asked for her hand with her father. Since he was in Canada, he FaceTimed his beau's dad and in anxiety, asked for her father's hand instead.

Nic hung up and called back just to ask him the right way. And, you all know what happened next!

The pair, though are all excited to be engaged, is in no rush to get into a marital life soon. The bride-to-be also stated that they were taking their time.

The duo first met through Instagram and later started dating since November 2017.