home Entertainment Who is Coach Ed Orgeron's Dating? Does He Have a Girlfriend or Wife?

Who is Coach Ed Orgeron's Dating? Does He Have a Girlfriend or Wife? 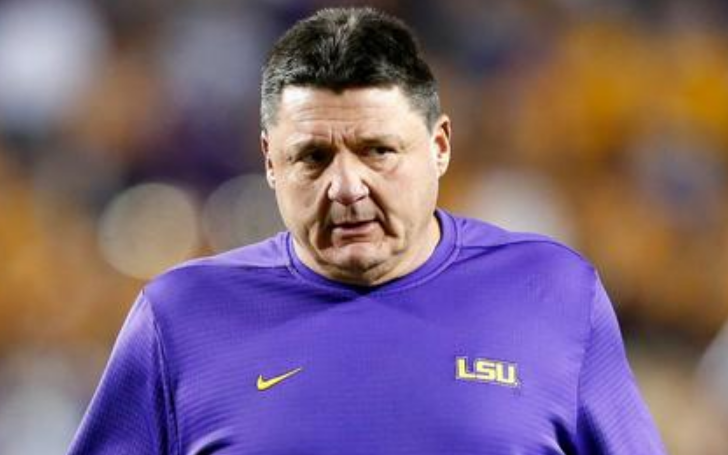 Here's what you should know about coach Ed Orgeron's relationship in 2020.

Ed Orgeron (born Edward James Orgeron) is an American football head coach at Louisiana State University (LSU). Ed has held his position as a head coach since midway through the 2016 season.

Before Ed embarked on his journey of head coach, he was a player himself. The head coach of LSU attended South Lafourche High School in Galliano, Louisiana with future Michigan Panthers, New Orleans Saints, and Atlanta Falcons QB, Bobby Hebert.

Ed and Bobby played on the school's Class 4A state championship team in 1977. Later, Ed signed to play football at Louisiana State University but left the program after his first year to transfer to Northwestern State University in Natchitoches.

Well, that was his playing career, and talking about his career as a coach, Ed began coaching in 1984 as a graduate assistant at Northwestern State and the following year coached at McNeese State in Lake Charles, Louisiana. That's how his journey as a coach started.

Following that, we assume you pretty much know about his excellent career as a head coach at LSU, but how well do you know about his personal life? Let's find out about Coach Ed Orgeron's wife or girlfriend in 2020.

Does Coach Orgeron Have a Wife?

Well, fans of Coach Ed Orgeron or LSU know for sure he was a married man in fact. But recently, the head coach called his marriage off with his former wife, Kelly Owens.

Kelly and Ed divorced in early 2020. But prior to Kelly, Ed was married to his first wife, Colleen Orgeron from 1992 to 1994. Following his divorce from Colleen, Orgeron married Kelly in 1997.

Also See: Who is Kyler Murray Dating in 2020? Find Out About His Girlfriend

After 23 years, Kelly and Ed Orgeron filed for divorce on February 26, 2020. The former spouses are parents to twin boys, Cody Orgeron, and Parker Orgeron. Moreover, Kelly also shares a son, Tyler, from her previous marriage.

So, Does Coach Ed Orgeron Have a Girlfriend Now?

He is famous, he has a stable career, more importantly, he is the head coach at LSU, so it's obvious Ed Orgeron's name has been linked to a few people in the recent days following his divorce from Kelly, but there are no official reports to confirm whom he is dating.

Coach Ed Orgeron pictured with some random bimbo but is she the new girlfriend? Well, that's still a mystery.
Photo Source: Twitter

Ed, however, was seen with some mysterious girl, and fans were fairly not happy with the whole thing. No names has been taken, but Ed Orgeron's alleged new girl's picture is all over the internet.

Guess, we will just have to wait what and who that girl is!

You May Also Like: Here's What You Should Know About Hayley Erbert and Derek Hough's Relationship