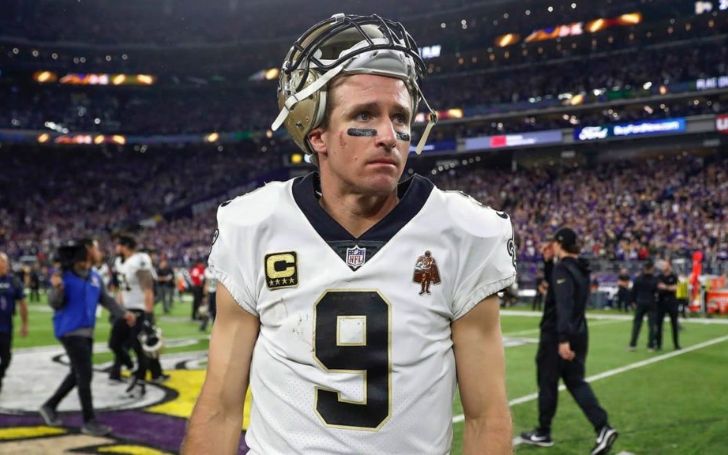 NFL fans might know who is Andrew Christopher Brees aka Drew Brees, born on January 15, 1979, the American football quarterback for the New Orleans Saints of the National Football League, is one of the most successful athletes in the current time. However, he attracted more attention recently from the action he tool amid of pandemic Coronavirus.

Now you might be thinking what Brees did that made people talk about him, then let us tell you fellas, Drew pledge massive plies of green to help out Louisiana for battling COVID-19 outbreak. As the NFL star accumulated a tremendous amount of cash from his successful career, he is giving out some of his earning to protect the people of Louisiana.

So, if you guys want to know how much Drew Brees worth and how much he deposited for the Louisiana, then keep on reading till the end of this article.

The MVP player Drew is one of the richest athlete in 2020.
Photo Source: Inside Hook

It isn’t shocking at all for Drew Brees to hold a net worth, which crosses millions of dollars, as he is one of the successful football stars. In his career, he perfectly managed to climb great heights and, with his hard work, garner hefty piles, which comes around $130 million, as per The Richest.

The American Athlete Brees makes his earnings from his gameplay in a different football match. In 2019, Forbes claimed in one of their articles, Drew earnings were around $42.4 million. He even leads his fellow NFL players in sponsor money, which crosses $16 million.

The multi-millionaire footballer, Drew, also collected a check worth $50 million from his two-year contract extension with the New Orleans Saints in 2018. Till today, the 19-year veteran actual earnings exceeds $220 million in on-field pay across his bright career. So, for Drew to have a net worth of $13 million seems quite fair in 2020.

We did mention about Drew Brees recent donation for Louisiana for battling against Coronavirus, As, 2020 began with a couple of crisis and world are fighting to stand up from the disaster, the NFL player, Brees with his wife, Brittany Dudchenko pledge $5 million to support people of Louisiana to survive the pandemic.

Except for his recent act, 41-years-old Drew frequently did tons of charity works in past days from his foundation, The Brees Dream Foundation. Through his non-profit organization, the football star donated more than $25 million to several causes and educational institutions in San Diego, New Orleans, and West Lafayette/Purdue communities.

Recommended: Thomas Modly Net Worth - Find Out How Rich the American Businessman is

According to Forbes, Brees also helped the New Orleans rebirth after the disaster caused by Hurricane Katrina through his foundation. Therefore it wasn’t the first time; kind-hearted Drew showed his love for the city.

Income and Assets Control of The American Athlete Drew Brees

An average salary for quarterback players in NFL, as per the record of CNBC, is $5.76 million, and the median wage comes somewhere $1.1 million. We know that Drew Brees is the game for some while now, and as one of the best in his league, he might earn than those numbers which support his lavishing lifestyle.

Focusing on the control of the assets of MVP player, Drew, he do own tons of luxurious cars, and estate in many profitable markets. But is we talk about one of the latest activities performed by the NFL star, Brees, then he put his million worth San Diego’s Carmel Valley property for sale a year ago.

In one article of Los Angeles Times they mentioned, the Saints quarterback paid $2.2 million for it in 2003 and sold it for $2.4 million. Built-in 2002, the house covered 6,000-square-foot which holds a billiards room, steam room, wet bar, sauna, resort-style pool, six-hole putting green and spa with a slide.

To find more details and information about your favorite celebrities feel free to follow Glamour Fame.