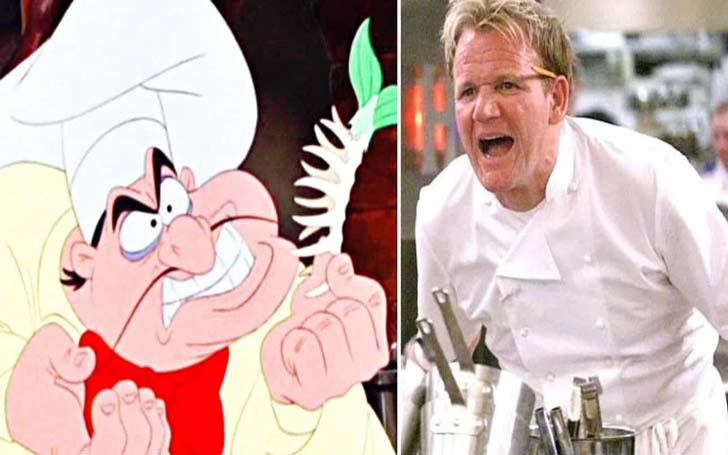 Fans want Disney to hire Gordon Ramsay as the angry chef Louis in the upcoming live-action remake of The Little Mermaid.

Gordon Ramsay is one of the most famous chefs in the world, he is not only renowned for his cooking but for his volatile temper and the tendency to go off on anyone. Almost everyone has seen the video of Gordon putting two slices of bread on either side of a contestant’s cheek and asking her to call herself an idiot sandwich.

As famous as his cooking is, Gordon’s temper is legendary, if something goes awry in his kitchen, he will raise hell.

Now, who is another such character that we know of in the entertainment industry? Prince Eric’s French chef 'Louis', who is obsessed with cooking, ring any bells for you? Well, he is almost the same to Ramsey, bad-tempered and crazy while cooking and fans are also seeing the connection as they want Gordon Ramsay to portray the role in the live-action remake of The Little Mermaid.

Disney just hired Halle Bailey to play the iconic role and the studio is yet to announce the rest of the hirings, the public is demanding Disney to hire the ill-tempered chef from England to play the role of Louis.

Gordon Ramsay has made his career by throwing stuff at people, chucking utensils inside the kitchen and also using too many expletives. The role would fit like a glove for the feisty chef, and twitter seems to agree.

Ever since the movie was announced, people have been going crazy with fan casting various roles. With some even suggesting Idris Elba as 'King Triton', no surprises there, Idris Elba is a favorite for fan casting, and fans would’ve had their way, he would be in each and every movie playing every character by himself. Well, it is not to cut and try as Terry Crews also threw his name in the hat with a twitter post as himself as Ariel’s dad.

Melissa McCarthy is also currently in talks to play the witch 'Ursula'. Ariel’s casting as an ethnic character came under some controversy, but we have nothing but love for the talented actress Halle Bailey.

The film which is set to be directed by Rob Marshall is going to feature new music from original composer Alan Menken and Lin-Manuel Miranda. The new Little Mermaid movie will swim to the theatres around 2021, so be ready for conservative news sites to blast the film and racists try to flood the review sites with negative remarks.

As for Gordon Ramsay, we are all here agreed on the possibility of hiring him to play the angry chef; it’s like a match made in heaven.