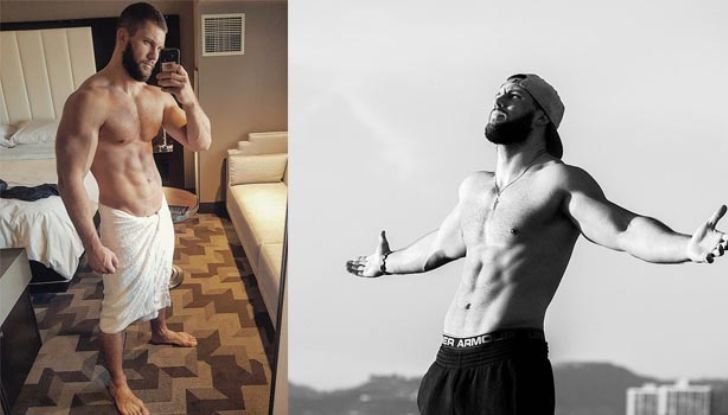 Born in Wurzburg, Florian Munteanu is a German-Romanian boxer, fitness model, and rising star in Hollywood. Munteanu's 7.4 ft imposing built endowed him the nickname 'Big Nasty," and he usually goes by it. It hasn't been long since Munteanu got his big break via Creed II in 2018, and now the actor has already joined two star-studded films.

People who think Florian is all brawn and no brain are mistaken; He apparently graduated with a degree in sports, media, and event management from the University of Munich. As a fitness model, much of his efforts go into building and maintaining his shredded body, but what caused him to pursue the opposite and lose weight. Find it out here.

Munteanu Had to Drop Some Pounds for a Part!

Florian weighed 250 pounds before he landed the role of Victor Drogo in Creed II. The actor told GQ in 2018 that the role compelled him to shed some pounds. "It's a heavyweight bout, so i was trying to lose, like, 20 pounds to drop to 220," said Munteanu.

Munteanu went from 250 pounds to 220 pounds for his role in Creed II.
Photo Source: GQ

The 30-year-old shares his diet plans with GQ. He said he had to maintain his weight throughout the filming. Hence he had to survive on uninspired chicken and rice. "All day, all night," he says. "I started my day with a bowl of cereal in milk."

Check Out: Did Kiersey Clemons Undergo Weight Loss? Learn All the Details Here

While Munteanu worked hard to lose weight for the part, his on-screen nemesis Michael B. Jordan had to gain some to stand on par with the 220-pounds goliath. Jordan had to add 25 pounds for the part. After the filming was done, Florian says he was back to his old routine and adding more to his muscles.

Munteanu says he had to eat rice and chicken all day, all night while filming.
Photo Source: Greatest Physique

After successfully dropping the recommended pounds, Munteanu shared the tricks for fans looking to lose weight. His tips were three-fold. Florian suggests focusing on fish and a high protein diet. He says training hard and running consistently is a must.

Contrary to his fast-growing fame, note that Munteanu has only starred in two movies till now. He made his debut in 2016, Bogat, after which he starred in Creed II. Florian has now got more reason to sweat extra as he took a big leap by scoring a role in the next Marvel movie. He is also set to lead opposite Kevin Hart and many in Borderlands.

"Set smaller goals and then move them and see how they affect the bigger picture," says Munteanu.
Photo Source: Muscle and Fitness

If you're looking to build a body like Munteanu's, we've got you covered. The actor eats four, five meals a day, mostly a high-protein and leafy diet. Munteanu trains his abs four times a day and says he does 40-50 minutes of warm-up before starting his regular workout.

Munteanu also has a piece of advice for people on the verge of giving up. The actor says, "Set smaller goals and then move them and see how they affect the bigger picture. Most people stop and then evaluate their results too early after, like, a month, but that's too early."