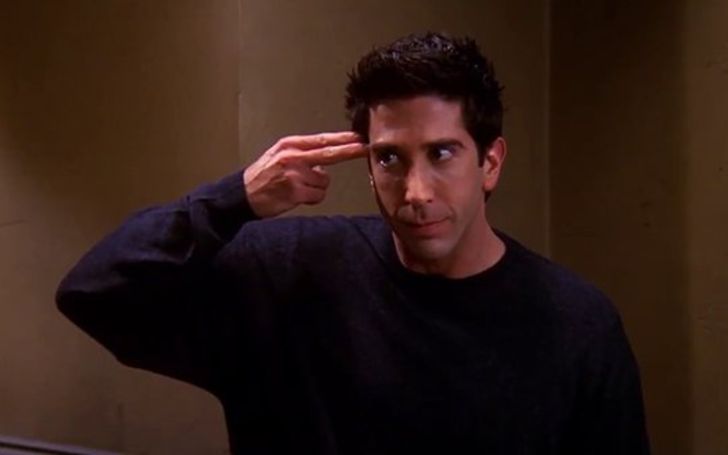 FRIENDS is arguably one of the television’s biggest shows ever and, even 15 years after its finale, fans are still captivated by each of its episodes. Now, one of the series' followers has spotted an interesting reference to the central theme of the show in Ross Geller’s aesthetics.

Looking back at the eighth season of Friends, the fan has called for attention to a particular detail.

Viewers are spotting such attributes more, after the show was placed on Netflix last year. In the episode, The One With The Tea Leaves, "Ross" (played by David Schwimmer) wears a grey T-shirt that features a reference to friends in a different language.

The T-shirt has a blue circle in the middle of the chest and includes a white symbol that looks like two hands joined together.

While some were shocked by the discovery, others absolutely ridiculed the analogy. One fan commented: “That’s some wholesome s**t.”

Another, on the other hand, added the easter egg was pretty cool, and something that was never heard before.

A third Redditor went on to praise the information saying: “You always see these ’10 things you never knew about friends!’ lists on s****y clickbait websites that's just the same stuff any fan would know! This is actually a new thing I've not heard before!”

Whatever the case, it seems quite obvious of the show wanting to spread the message about friendship in as many ways as possible.

What’s more, Friends costume designer Debra McGuire previously spoke about the importance of the outfits on the show.

Ross Geller struggling with pants in the fifth season of friends (episode 11) was the difficult to shoot, according to series' the costume designer.
Source: Youtube

Speaking About Ross’s leather pants in season five, McGuire told Metro.co.uk, the attire was "extremely difficult" to shoot. She revealed Schwimmer had to do it over and over again. The designer further added they often used to do scenes for multiple times, but knew the pant scene was going to be even more complicated with David shimmying in and out of it.

Debra added Schwimmer, nevertheless, was a "good sport" when it came to filming those scenes.

In one of the season eight’s episodes entitled, The One With The Secret Closet, a scene occurs in which Chandler speculates with "Joey Tribbiani" (Matt LeBlanc) about what could be in Monica’s "always locked" closet.

As the episode progresses, Chandler becomes more suspicious on what his wife is hiding and even jokes that she may be hiding her ex, "Richard Burke" (Tom Selleck) in there.

While inspecting the very scenario through a couple of screenshots, and comparing the same closet pictures with prior seasons, fans noticed the doorknob to the closet being mysteriously moved.

In that particular scene, the doorknob is on the right-hand side of the green door, but it wasn't always there according to its showings in earlier seasons. The position is definitely interchanged.

All the 10 seasons of Friends are currently available on Netflix.