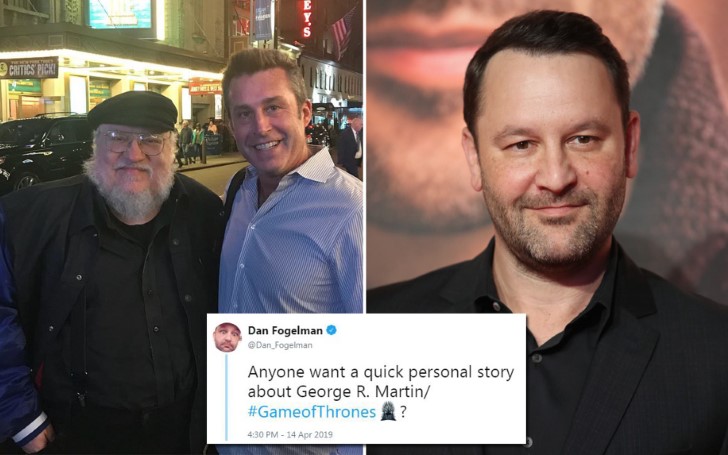 Dan Fogelman, the creator of the hit NBC series “This is Us” shares a heartwarming story of Game of Thrones author George R.R. Martin's unconventional act of kindness towards his dying friend.

On Monday, Dan shared the heartwarming story through a series of posts on Twitter where he explains how he and his best friend, Alex Hanan, met Martin ahead of Bruce Springsteen's Broadway show in New York in 2017.

Alex reached the show earlier and rung Fogelman who was in a taxi heading to the show.

Alex, a GoT fanatic, was waiting outside the theater for Dan when he spotted Martin.

Fogelman tweets, "He says he’s going to go talk to him. I beg him not to. He hangs up on me."

He continued, "Now, a bit about Alex. He is larger than life. Handsome and charming as hell, with the best head of hair you’ve ever seen. He’s also obsessed w Game of Thrones like no one you’ve ever known. And he never listens to anyone so I just KNOW he’s going to go accost George R Martin."

Fogelman finally reached the theatre and his friend Alex told his pal he approached Martin, took a picture with him and 'somehow - miraculously - got George R Martin’s cell phone number'.

Hanan also told Martin was with his wife at the time and they usually go for pizza after a show. 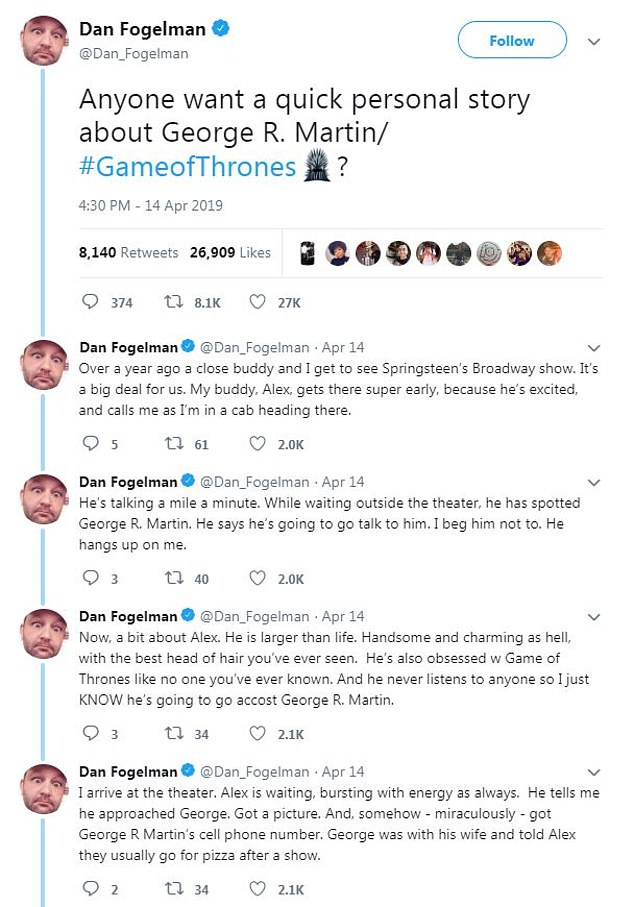 Once the Springsteen show ended, Alex texted Martin despite Fogelman begging him to let it go.

Fogelman recalled Alex texting "maybe we will join you."

"Alex, as I knew he would, immediately texts George. And to my absolute shock... George R Martin writes Alex back! He tells us to meet them at a local pizza joint."

"Alex and I go. I’m convinced it’s going to end badly. A weird miscommunication. We are going to get ghosted. At least it will be a funny story. And then... George and his lovely wife arrive."

Also read: Game of Thrones Author Sheds Light on How HBO’s Ending Differs From The Books

However, the four ate pizza for about an hour or two and at the end of the meal George gives Alex a Westeros coin.

"Alex reacts stronger than is appropriate for a 40-something man. We all part ways. Alex is giddy." 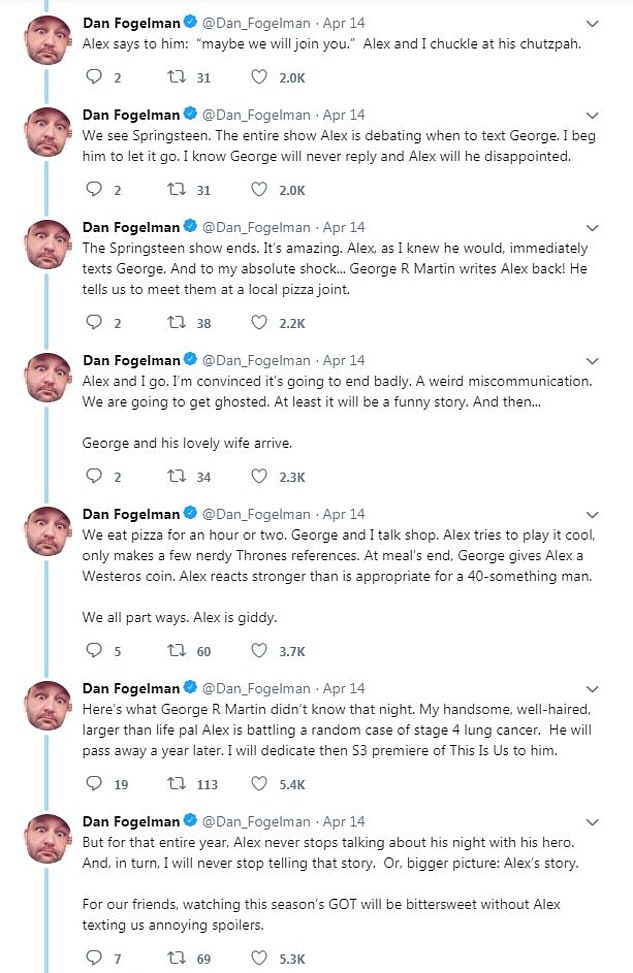 Martin was with his wife at the time and they including Dan and Alex went for pizza after a show.
SOURCE: Daily Mail

But Martin was unaware about Alex 'battling a random case of stage 4 lung cancer.

Alex passed away a year later in July 2018. The same year, Fogelman dedicated the This Is Us season three premiere to his late best friend.

Though the episode didn't talk about cancer or death, a decree flashed over the credits which read: 'In loving memory of Alex Hanan.'

Read more: Science Predicts The Ruler of Westeros In Game of Thrones Finale

"But for that entire year, Alex never stops talking about his night with his hero. And, in turn, I will never stop telling that story." Fogelman tweeted.

"Or, bigger picture: Alex’s story. For our friends, watching this season’s GOT will be bittersweet without Alex texting us annoying spoilers." 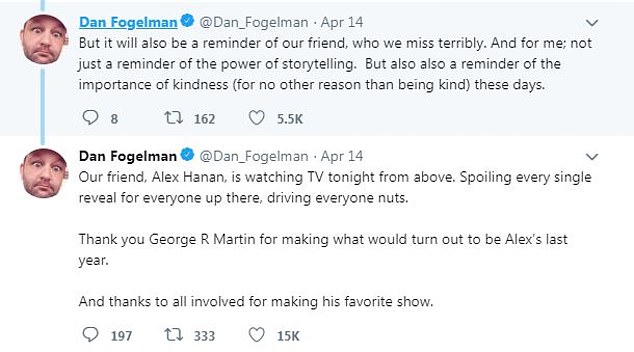 "Our friend, Alex Hanan, is watching TV tonight from above. Spoiling every single reveal for everyone up there, driving everyone nuts."

"Thank you, George R Martin, for making what would turn out to be Alex’s last year. And thanks to all involved for making his favorite show."

Alex was diagnosed with lung cancer in 2014 and was extremely open about his diagnosis about which he shared his experience in raw and detailed blogs.