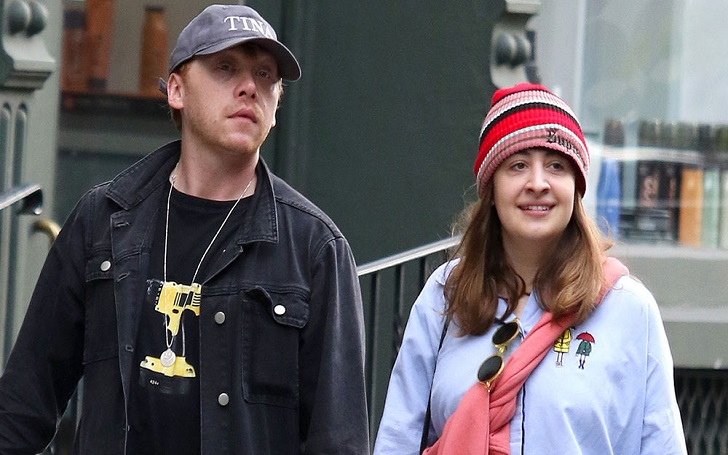 'Harry Potter' star Rupert Grint and his girlfriend, Georgia Groome finally took their relationship to the next level as they welcomed their first baby. The proud parents confirmed their pregnancy only last month after Groome was spotted with her baby bump buying essential goods amidst COVID-19.

The couple's representative announced the blissful news with a statement with The Mirror and also asked fans to respect their privacy at this very special time. Grint becomes the first in the golden trio of the superhit movie Harry Potter to become the parent.

Likewise, Rupert and Groome are one of the power couple of the Hollywood industry who has managed to keep their relationship out of controversy. So, without any delay, let's know about the beautiful journey of these love birds.

Rupert Grint and Georgia Groome Are Together For Almost A Decade.

Rupert Grint, who became the part of our childhood as 'Ronald Weasley' in the famous Harry Potter franchise, has always kept his personal life, especially love life out of the limelight. The 31 years old actor has been dating his girlfriend, Georgia Groome, since 2011.

Rupert Grint is dating the actress, Georgia Groome for almost a decade now.

The couple kept their dating life under the wraps for many years until their old picture circulated on Twitter, which confirmed their fling started back in 2011. However, the details about how they meet and fell in love is a mystery only the lovebirds can reveal.

Whatsoever, Rupert and the Angus actress' relationship has been nothing but more robust with each passing time. Further, they share the same profession, which also helps them to balance their career and love life.

Rupert Grint Always Dreamed Of Starting His Own Family.

Rupert Grint never exclusively talked about his girlfriend, Georgia Groome; however, he does has opened up about his desire to be a father. During an interview with The Guardian in the year 2018, Grint revealed his plan to "settle down and have kids soon".

Rupert Grint and Georgia Groome first confirmed the news of their pregnancy in April 2020.

Moreover, the 31-year-old who amasses the net worth of $50 million, also jokingly said that there is no possibility of him to name his child after anyone from the Harry Potter franchise. The English actor playfully toyed with the idea of naming his son after his character 'Ronald Weasley' saying,

"If I had a son, would I call him Ron? It's quite a good name, but probably not. And Grint's a tough name to pair a one-syllable first name with."

Meanwhile, Rupert and his longtime partner are yet to reveal the name of their newly born daughter. Besides, fans are head over heels after hearing the news of their favorite star, becoming the father and showered the couple and their child with blessing through social media.