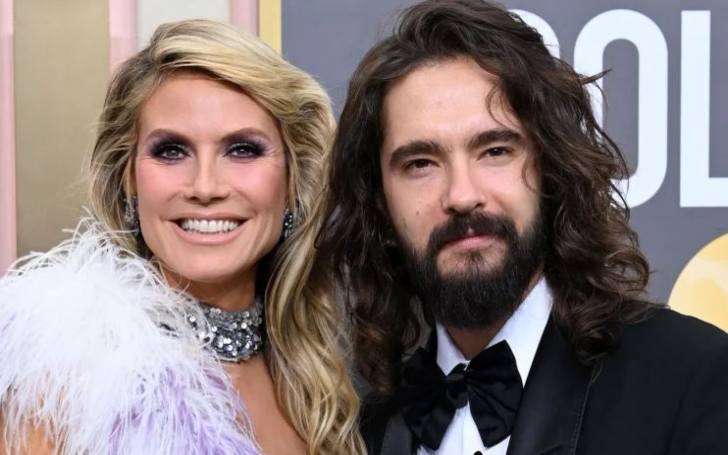 Victoria's Secret Angel Heidi Klum brought some exciting buzz to the industry. On the 2023 Golden Globes red carpet, she stepped out with her husband, Tom Kaulitz. They enjoyed kissing in front of photographers and fans. A model dressed all in the party wear, including an eye-catching, glitzy silver cutout dress designed by Kevin Germanier.

With her blonde and dark hair, she accessorized with gorgeous silver earrings. She completed the look with a silver bag and silver heels. On the other hand, her husband, Tom, dashed in his black tuxedo with a bow tie.

America's Got Talent Judge Heidi Klum is a happily married woman who exchanged wedding vows with Tom Kaulitz. The duo was first romantically linked back in March 2018. However, they kept the relationship tight-lipped until May of the same year.

Businesswoman Klum confirmed her relationship with Tom through her Instagram posts public. Soon they even made it worldwide after the pair appeared at Cannes Film Festival together by holding hands.

Within a year of dating, they got engaged on 24 December 2018. The guitarist bent into his knee and purposed to the love his of life. Klum and Kaulitz would make good on their promise and tie the knot the following year.

The pair announced their engagement through their respective social media account. The actress even shared a beautiful picture of the couple on her Instagram account, where she captioned "I Said Yes" with a heart emoji.

In February 2019, Heidi Klum and her beau privately married and surprised their fans and followers. Their wedding ceremony took place in August 2019 on the yacht Christin O in Italy.

The bride posted an amazing picture from their marriage and captioned it. "We did it."Victoria's In that particular post, the newlywed couple is kissing on a luxurious yacht full of wonderful decorations.

During the event, Klum wore her fill-out white wedding gown and veil. She looked like a princess in her beautiful outfit. At the same time, the groom wore his white tuxedo and teamed with his wife.

The German woman shared her celebrations all week and entertained her well-wishers. In one of her videos, her husband helped her pick a lemon from a tree at Restaurant Da Paolino Capri, and they enjoyed a limoncello with their friends.

Past Relationships and Affairs of Klum

Like her breathtaking career, Heidi Klum had several relationships that came to the limelight. In 1997 she married stylist Ric Pipino and divorced in 2002.

In March 2003, she began dating Italian businessman Flavio Briatore. After some months, the actress announced her pregnancy with the businessman. However, they later split, and Klum started her dating journey with Seal.

In May 2004, she welcomed her first child, Leni, in New York City with Seal's present. With so much love and understanding, the duo engaged on a beautiful glacier in Whistler, British Columbia, in December 2004. Within a year, they exchanged their wedding vows in Mexico and surprised their fans with the news. During their marital journey, they renewed their vows yearly on their anniversary in front of their close ones.

On 22nd January 2012, after seven years of marriage, the duo announced they were separating. Their news of the split shocked the world; they looked cute together. After three months, Klum filed for divorce and parted ways. Their divorce was finalized on 14th October 2014, and she restored her name to Klum.

After her divorce, Heidi dated Vito Schnabel, an American art dealer. However, her relationship with Vito didn't last, and she started going out with the bodyguard Martin Kirsten.

Heidi Klum is a Happy Mother of Four Kids

West Germany native Keidi Klum is now a mother of four children. Despite her hectic work schedule, she has taken care of her kids in every possible manner. Being a helicopter mother, the model keeps her kids as little as possible and limits watching TV.

Regarding her deeds, she stated in a media.

"I'm more old-fashioned. I don't believe in just sitting your kids in front of a TV," she told this reporter. "They should be outside, playing with dogs or getting dirty. When I grew up, I was outside."

Heidi welcomed her second child son, Henry Samuel, in September 2005. In November 2006, she gave birth two her third child, Johan, and later welcomed the fourth child, Lou Samuel, in October 2009. All three kids are with her former husband, Seal, while her firstborn child, Leni, is from Flavio.

The supermodel is very private regarding her children's life and shares no pictures of them. On Thanksgiving, she shared a family picture with their stepdad, but all kids' faces were covered with emojis.

A Lavish Lifestyle of Heidi Klum

TV personality and producer Heidi Klum is surely living a very luxurious lifestyle. She is one of the richest celebrities ruling the entertainment world. As of 2023, Klum enjoys a net worth of $160 Million, which the model earned through her impressive career.

In a given year, Heidi makes over $40 Million, which includes endorsements, production, and hosting. Starting her career with $300,000 after winning a modeling contest, Victoria's Secret has been named the world's top-earning models on various occasions.

In 2011, Klum earned over $20 Million from modeling only. Not only that, in 2017, she even got listed as the highest-earning television host with $21 Million that year.

Prime-time Emmy award-winning actress Heidi Klum is living a life of a queen. She has not only earned a huge amount of fortune but has invested in various lavish homes.

In December 2010, she and her former partner, Sean, bought $14.2 Million mansions in Brentwood Country Estates. That particular property is limited to 12,300 sq feet with various features. As the former Mr. and Mrs. Samuel split, they listed their mansion for $25 Million, which later got sold for $24 Million in 2014.

Currently, she is living at Bel-Air Mansion alongside her husband and four kids. The six-bedroom mansion cost the couple $9.8 Million, and they enjoy their life to the fullest. Nevertheless, the model owns a $5.1 Million penthouse in New York City. She bought the 1800s build suite in 2018, which had been previously used as an art studio.