home Entertainment What is 'Squid Game' Star HoYeon Jung's Net Worth in 2021? Learn About Her Earning Details Too

What is 'Squid Game' Star HoYeon Jung's Net Worth in 2021? Learn About Her Earning Details Too 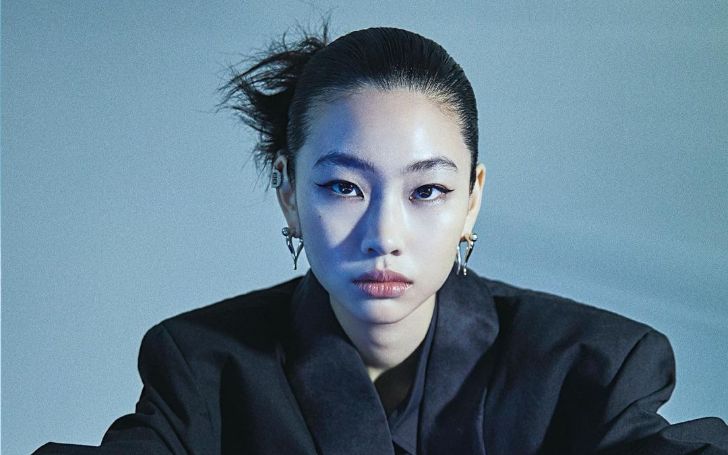 What is 'Squid Game' Star HoYeon Jung's Net Worth as of 2022? All Details Here!

With the recent turmoil caused in the entertainment industry after the Netflix dystopian series Squid Game, everyone is gushing over the character Sae-byeok, a North Korean defector. The fascinating role of a strong girl surviving alone to reunite with her family is portrayed by the talented HoYeon Jung.

HoYeon Jung is a South Korean actress and model born on June 23, 1994. The celebrated artist grew up in Seoul, South Korea, along with two siblings. Regarding her love life, she is dating the South Korean actor Lee Dong-hwi.

Even though Jung's character didn't get to visit Jeju Island, in real life, the actress' net worth could definitely provide for multiple round trips. Continue reading to know more about HoYeon Jung's Networth.

What is HoYeon Jung's Net Worth?

The runner-up of Korea's Next Top Model of its 4th edition, Jung Ho-Yeon, has been a hot topic on the internet in recent days. According to reports, the international model has accumulated a networth of approximately $4 million as of 2022.

According to Forbes, Ho-Yeon's Instagram follower count increased from 410,000 to 15 million in three weeks after releasing the record-breaking series Squid Game that generated $871 million in revenue with $15 million of total investment. No wonder the actress received her fair share out of it.

Before pursuing a career as an actress, Jung graduated from Dongduk Women's University, with modeling as a major. The aspiring individuals worked for several top-notch brands like Gucci, Louis Vuitton, Hermes, Chanel, Fendi, Gap, Inc., and many more fashion magazines that aided Jung in accumulating such whooping amount.

The multi-talented artist, renowned as the 'Red-Haired Asian' became Global Ambassador of Louis Vuitton, joining BTS in 2021. As the star said, "I look forward to all the moments with Louis Vuitton as a global ambassador." With all these new endeavors in acting and modeling, Jung's networth shall easily surpass $10 million in no time.

As the saying goes, "Rome wasn't built in a day," even though the Asian star award winner HoYeon Jung's success seems overnight, in reality, the actress has been part of the industry for the past 11 years as a model. Jung kicked off her modeling career at 16 as a freelance model before moving to New York.

The 28-year-old expressed her view on resonating with her character's loneliness portrayed in the series during her early career days. However, the ambitious personnel's dedication and hard work towards her craft paid off in the end.

Let's hope the aspiring individual continues showcasing her talents through various other productions and receives all the love and admiration shortly. Well, with the recent increase in people crushing on Jeon, the support and love shall stay for some good amount of time.