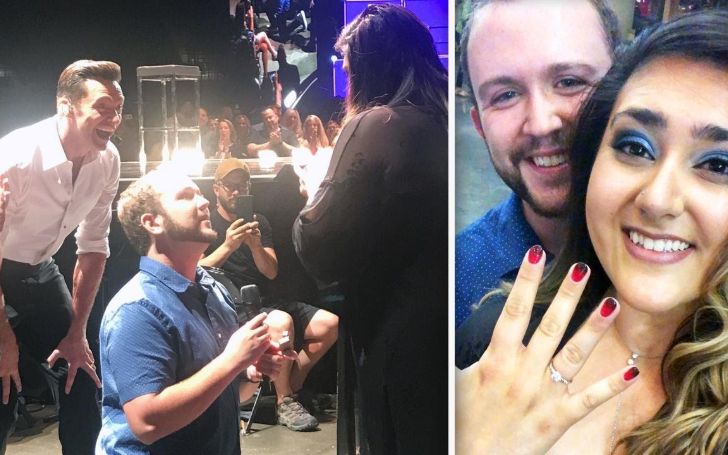 Hugh Jackman helps a fan propose to his girlfriend during his Tour: 'I Don't Normally Do This'.

Former Wolverine actor, Hugh Jackman helped one fan propose the million dollar question to his girlfriend after receiving a letter from him.

Jackman shined his star power on the special occasion of one happy couple.

The 50-year-old actor surprised fans when he took a moment of a break from his tour, "The Man. The Music. The Show." in St. Paul, Minnesota, on June 22.

“I don’t normally do this and you’ll understand why afterward but I got a letter from a guy named Joe,” Jackman told the crowd present at the Xcel Energy Center. “Joe told me he was going to be here in the audience.”

As the actor stepped off the podium, he reached Joe Kripal and his girlfriend Sanaa Ahmed while bystanders in the background could be heard chanting, “Oh my gosh, oh my gosh.”

As Jackman requested the camera operator to pan the spotlight on him and Kripal, he gave an extra microphone to the man and said, “Hi Joe, how are you doing? It’s good to meet you. Say hi to everyone.”

“Hi everyone,” Kripal addressed the arena.

“Sanaa, I want to spend every day with you. That’s why I asked a superhero to help me out with this,” Kripal said to Ahmed.

The guy then bent down on one knee as the gathering start to surge their voice.

“Will you marry me?” Kripal asked Ahmed, who nodded as she covered her mouth with her hands in the excitement.

Jackman gave the newly engaged lovebirds a hug and then asked Ahmed, “Did you have any idea to which she tearfully responded, “No,” as he giggled.

In May, Jackman led the audience at his tour stop in the U.K. in a serenade for his friend and X-men co-star, Sir Ian McKellen on his 80th birthday.

You May Also Like: Hugh Jackman Is Unsure Whether He Will Be In The Greatest Showman 2

Jackman expressed his apology for not being able to attend McKellen party later only to send a video where he sang a rendition of “Happy Birthday,” much to the crowd surprise.

At the end of the video, Jackman added, “Love you, man. Happy birthday.”

In the 2019 'Queen's Birthday Honours,' Jackman was bestowed with a Companion of the Order of Australia, for "eminent service to the performing arts as a revered actor and performer, and to the worldwide community, particularly as a supporter for poverty eradication.”

As for the film, Jackman is set to appear in the comedy-drama, Bad Education alongside Allison Janney, Ray Romano, Geraldine Viswanathan, Alex Wolff, Kayli Carter, and Rafael Casal.