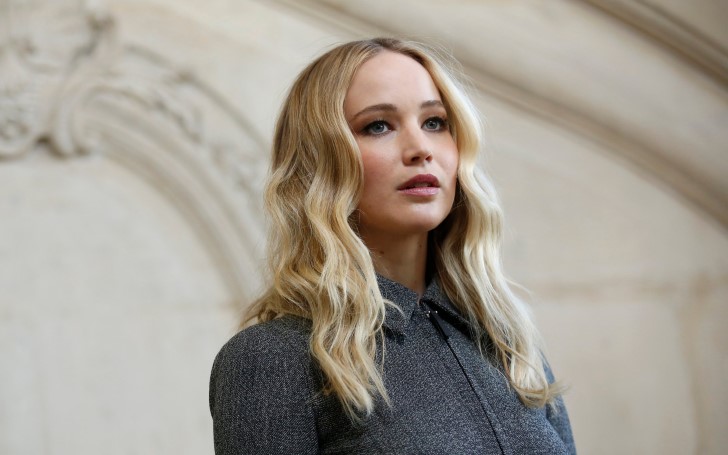 The Oscar-winning actress showed off her gorgeous engagement ring at the Dior fashion show.

The 28-year-old actress confirmed her engagement with art gallery director Cooke Maroney on February 9 after just eight months of dating.

Previously, the Joy actress sported a modest diamond ring on a plain gold band while celebrating her dating anniversary with her financé at New York's IL Buco Italian restaurant three weeks ago.

As for now, the screen siren showcased an emerald cut diamond ring of estimated 150,000 euros while posing in a grey mini dress prior to her FROW appearance.

According to Gemologist Grant Mobley, the eye-catchy ring is a four to five-carat diamond set in a "platinum four-prong solitaire mounting with a petite band."

"The beauty of a classic mounting like this is that the center diamond is the main focus and can get all of the attention."

"Because there are no other stones or embellishments on the ring at all, you can tell that the natural center diamond was the most important part of this ring for the couple."

Estimating the cost as per the size and rarity of gem, Grant explains:

"A natural centre diamond of that quality and size would be close to $200,000 (£150,000), and because large, natural diamonds are growing increasingly rare, this ring will definitely retain its value over time."

The Hunger Games star kept her relationship with the art gallery director under wraps since the start of their relationship presumably from June last year.

As per some sources, the actress apparently is "happy" in her romance with the New York art gallery director.

"They [were] super cuddly throughout dinner - very affectionate and comfortable with each other. She's really happy. She has nothing to hide. This seems like the real deal."