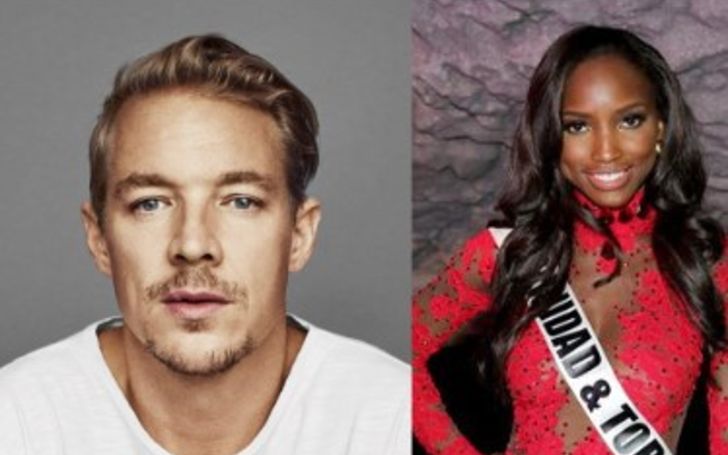 Here’s everything you should know about Jevon King, Diplo, and their newborn son.

The 30-years-old beauty pageant Jevon King gave birth to her newborn child, Pace, on March 20, 2020. In the beginning, she didn’t reveal the name of her baby father; however, things got clear after the American artist Thomas Wesley Pentz aka Diplo disclosed he was the dad of King infant son.

The mother of one Jevon professionally is a Trinidadian model who, with her beauty and talent, won the title of Miss Universe Trinidad and Tobago 2014. She even competed at the Miss Universe 2014, representing her country but failed to succeed in the first position.

King, who just became a mother, currently looks after her son without her beau, as Diplo is far from his family due to his work and situation created by the pandemic Coronavirus. Though Pace is new to parenthood, it isn’t for the famous DJ and songwriter Diplo. We will talk more on this topic on this page, so keep on reading.

The lovebirds Jevon King and Diplo welcomed their first child, Pace, on March 20, 2020. As there was no news related to their relationship before their son was born, the beauty queen King didn’t disclose details on her son’s father.

The skeptic situation raised a couple of speculation; however, all of that confusion came to an end on the following mother day when the famous musician Diplo mentioned that Pace was his son with King on his Instagram post.

You Might Love To Read: Who is Madelaine Petsch's Boyfriend? Is She Dating Someone in 2020?

According to NBC News, Diplo hesitated to share the happy news because he hasn’t met Pace. Indeed, the 41-years-old American record producer hasn’t got a chance to meet his newborn. Why? Well. It is because of the current pandemic situation uplifted by the COVID-19.

Yes, DJ Diplo had a baby during the quarantine. He is a million miles away from his baby boy, Pace, and due to closed borders, he can’t be with him even though how much he craved to meet his baby infant.

Diplo Two Sons From His Previous Relationship With Kathryn Lockhart

On the post where Diplo declared having a son with the former Miss Universe contestant in Mother’s Day, he also shared two other photos. The post included pictures of himself with his mother, Barbara Jean Cox, and his two sons from his previous partner, Kathryn Lockhart.

Click To Read: Some Facts to Know About Andre Harrell's Son Gianni Harrell

So, Diplo has two cute sons Lockett Pentz, 10, and Lazer Pentz, 6 with his ex-girlfriend Lockhart. The former lovers welcomed their first child in 2010 and gave birth to their second son in 2014 when DJ was rumored to be dating gorgeous singer Katy Perry, as per E-News.

Nevertheless, Diplo is dad to his three sons, and, as we know, he do take great care of his elder sons; he will also be looking after his baby boy by sharing him tons of happiness to live a joyful life.