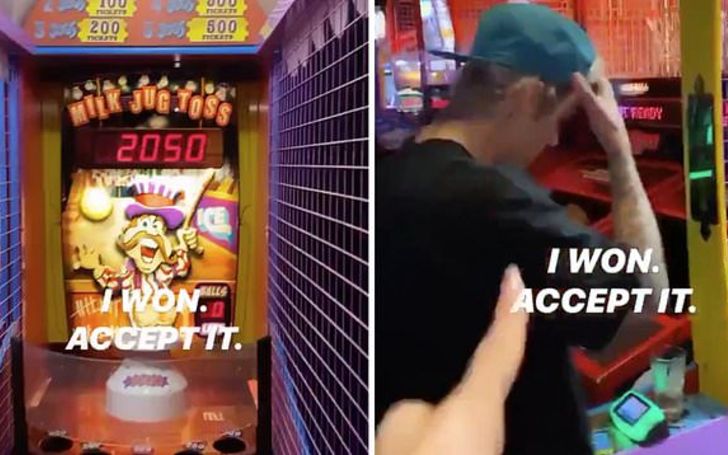 If you are a 'Jailey' fan, then you probably didn't miss the offensive reaction from superstar Justin Bieber towards his wife Hailey Bieber after losing an arcade game.

A short story shared from Hailey Baldwin Bieber's twenty five million-followers-filled Instagram now seems to create a whirlwind of criticisms for showing such inappropriate behavior by the 'Intentions' hitmaker.

Though, the short clip of Justin Bieber getting all aggressive and hyper over losing an arcade game has now been deleted; however, fans seemed to have captured it as it's creating a buzz on the internet.

Fans are not happy with the 'Yummy' hitmaker who dedicated an entire album 'Changes' for his sweetheart Hailey. Not just limited to that he also released a eight-episode docu-series 'Seasons' on Youtube where he describes each and everything that's been going on his life for the past years and how important Hailey's been in his life.

So accounting all that, we can't just say Justin's arrogant towards his wife because he considers the 23 years old IMG Model as a gift sent to him by the god.

If you are updated, then you might well know that Justin had a traumatic relationship on and off relationship with his former partner Selena Gomez, which made him indulge in doing drugs, brought creepy anxiety, and feeling of worthlessness.

Check Out: Justin bieber Speaks About His Incurable Lyme Disease & Its Serious Impacts

As in the docu-series Bieber articulates it all showing how important his wife Hailey's been to get him back on the stage, perform, dance, and come up with new music.

And on the positive aspect, it seemed like it was just a couple 'thing' as Hailey uploaded a snap from the same day where the coupe seemed chill spreading their love. And on the side, there are also rumors of Hailey being pregnant with Bieber's child. Some fans even came with speculations of the 'Baby' hitmaker arrogance was a side effect of his 'Lyme Disease'. What do you think?

We hope you enjoyed the article, stay tuned for more Entertainment articles on Glamour Fame.