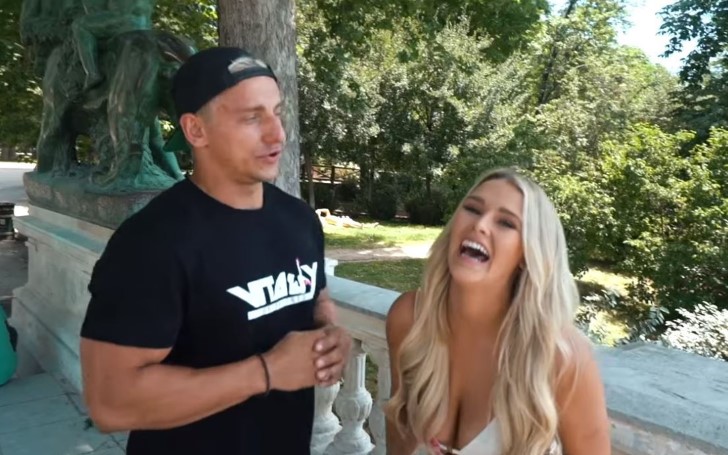 Kinsey Wolanski's boyfriend is trying out ladies for a new streaker video.

During the Champions League final, one story was dominating even the result of the final. For people who weren’t interested in the football game between Liverpool and Tottenham, one thing got everyone involved. A blonde girl invaded the pitch and ran wearing a revealing leotard.

Yup that is what happened on the pitch, and later it was revealed that her boyfriend Vitaly facilitated the pitch invasion that has now made Kinsey a superstar. Now, it seems he is back at his shenanigans again. Vitaly is back at it again as he recently uploaded a video where he is holding a tryout for one lucky woman to make it famous on Instagram.

The video starts out as four beautiful ladies stand in their bathing suit as Vitaly tells them that he is going to give one lucky winner a chance to become famous like Kinsey. Then he asks the girls to race each other in their bathing suit, and he told them whoever wins will get to do another pitch invasion streaking.

Watch: Vitaly holds a casting for his next streaker

It was a tough fight between four very beautiful ladies, and one of them won so watch out whichever football competition they are thinking of crashing this time.

Vitaly and Kinsey recently tried to do a similar pitch invasion in Copa America, but their full proof plan of walking in with disguise and then running onto the pitch was foiled by 20 security guards who tackled Vitaly. They were both arrested and thrown in jail but released later on in the day. Kinsey even congratulated the Copa America for winning this time.

The famous Youtuber is making some serious content, and if the tryout is a sign, some new contents are coming from the two lovebirds.