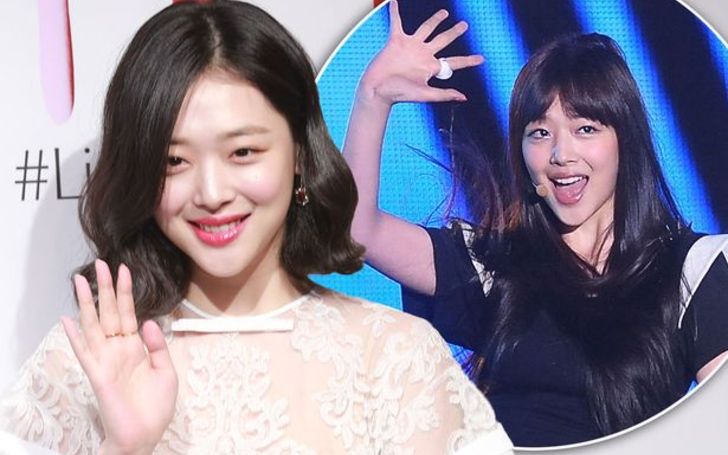 K-Pop star Choi Jin-ri aka Sulli, found dead at her home near Seoul on Monday, October 14.

At the young age of just 25, the gorgeous pop sensation Sulli's demise has not only made millions of his fans saddened but left fans in a shock!

As per reports from the star's manager, Choi was suffering from depression and has stated the reason behind her death as an attempted suicide.

Sulli was found dead at her home in Sujeong-gu, Seongnam, South Korea.
SOURCE: The Sun

Jin was found dead at 3:20 pm after her manager arrived at her home after he couldn't contact her.

The local paramedics were immediately called and arrived around 3:29 pm.to the scene.

The 'All Mine' hitmaker is one of the renowned members of the Korean entertainment industry as she gained massive recognition from K-pop girl band f(x).

On the shocking part, Suli was also a target of online abuse and was a close friend of K-pop star Jonghyun, who committed suicide back in December 2017.

Sulli's death has been controversial news on the internet, and soon after the news about her demise was heard, fans came with different assumptions behind her death; some even calling it a 'murder.'

One fan shared a condolence for the singer/actress tweeting,

Depression and suicide are some of the critical issues happening among youths. The thing we suggest regarding the problems is to share with your closed ones instead of hiding it. Depression and hiding your sorrow is the root for committing suicide. Be strong; think about the impacts it made lead to your near dears.

Our heartfelt condolences and sympathy to the late Korean sensation Sulli and her family. May her soul rest in peace in heaven.

Find Out: Did Late Youtube Star Etika Commit Suicide? His Cause Of Death Revealed!!!

Stay tuned and connected to find updates on the recent Entertainment news on Glamour Fame.