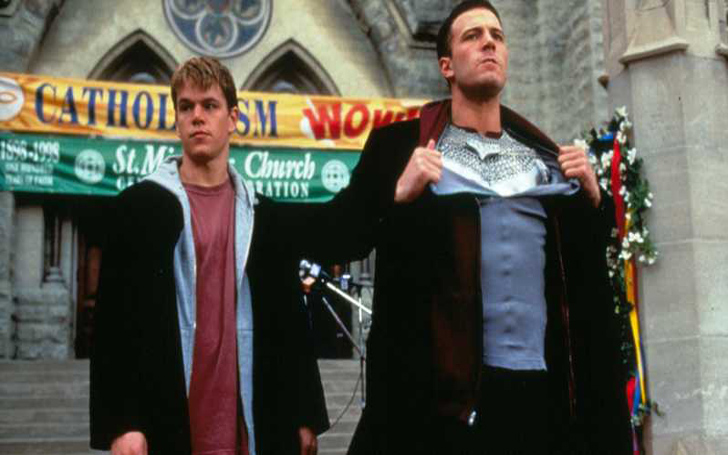 Matt Damon is coming back to play Loki, not in the MCU though!

When we say Loki one person comes to mind, Tom Hiddleston, comes to mind from Thor and Avengers. The man, in all practicality, is synonymous with the character of Loki and he should be because the portrayal by Tom is an iconic one. But there was another mainstream Loki before the MCU made him a fan favorite, there was another Loki in Hollywood, and he was none other than Matt Damon.

Most people would be confused, so let us clear the air, Matt Damon was not a Marvel Loki, well, he was Loki in a small cameo role in Thor: Ragnarok but except that. He appeared as Loki in the controversial film of 1999 called Dogma directed by Kevin Smith.

Recently, the star-studded trailer for the movie, 'Jay and Silent Bob Reboot', made its way out of comic con and onto YouTube where we saw various superstars making cameo appearances. Even Ben Affleck is back in the movie after the long-running feud between Kevin and Ben seemingly being quashed. But one person in the trailer caught our eye, Matt Damon; he was sitting inside a church holding bible and turns around to smile. We see him in the same clothes he wore in Dogma, and we even speculated, maybe Loki is making a return.

Nothing was confirmed, and then all of a sudden, Kevin Smith posted on Instagram saying Matt is indeed playing Loki in the Reboot. In the lengthy post, he talked about approaching Matt Damon for the movie thinking he was in 'Jay and Silent Bob Strike Back' so he should be in this movie. In Strike Back, we see Jay, and Silent Bob makes their way into the set of Good Will Hunting where Matt Damon and Ben Affleck are playing in the sequel for the movie. So, Kevin wanted to do something with Good Will Hunting, again after Matt Damon said he would come back. He was thinking of having Matt portray the character again but then his wife, Jennifer Schwalbach, suggested he use Matt as Loki in the movie.

The problem with getting Matt to play Loki is, he was evidently killed in Dogma during the final battle, so how would you bring back a dead person in the movie again. The same sentiment Kevin conveyed to his wife when his wife said, “Well it’s a good thing you don’t know the writer, or else you might be able to change your idea.” The whole idea of Strike Back was ridiculing the Hollywood process of remakes and sequels, so it won’t matter how he brings back Loki.

Reboot is going to a lot of fun for fans of Kevin Smith. Almost all the actors from the view askewniverse are returning for the Reboot. When Loki does appear, it will be funny what convoluted explanation they come up with to explain his appearance. Since Reboot is about making fun of studios bending over backward to explain the moments portrayed on screen it would be a fun exercise in self-deprecating humor and some meta jokes about the stupid explanation.

Whatever comes to pass, we will be there to see the latest entry in the Jay and Silent Bob series which previews on 15 October and then the two leading actors Kevin Smith and Jason Mewes tour with the movie all over America.