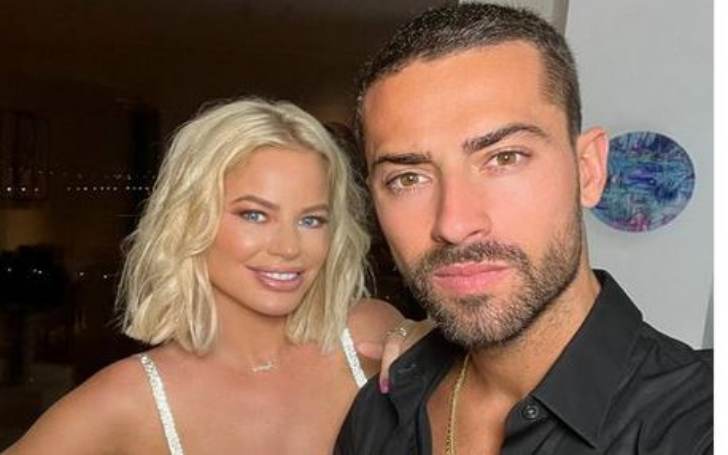 Have you watched Real Housewives of Dubai? If you have viewed that show, these next personalities are no strangers to you. Her name is Caroline Stanbury, a British TV personality and businesswoman with a massive fan following. She is also popular for appearing in the reality TV series Ladies of London from 2014 and 2017.

A Beautiful Love Story of Caroline Stanbury and Sergio Carrallo

The Real Housewives of Dubai duo, Caroline Stanbury and Sergio Carrallo, crossed paths in 2019 at Newport Beach, California. Caroline was promoting her podcast during their fateful meet.

After the encounter, The former footballer asked her on a date, and she replied yes. During the first date, Sergio even lied to her about his age stating he was 31; in truth, he was only 24.

Despite the lie, Caroline and Sergio's romance grew. Eventually, the two began a sweet love journey. Soon, the pair started appearing in several public places by holding hands. They even appeared in season 1 of The Real Housewives of Dubai together.

During the show, they revealed various information regarding their relationship. Due to their age difference, Sergio's father offered him money to break up with Caroline. Even their families were shocked about their relationship but later loved their pairing and bonding.

After two years of their romantic affair, Sergio bent into his knee and proposed to his love of life in January 2021. At that time, they were trip to Nepal to celebrate New Year. Well, the response was a big yes from the businesswoman.

The duo announced their engagement through their respective social media accounts. She shares several clips from the moment with her fans and family. On November 11, 2021, the pair officially got married on Mauritius Island due to the UAE law against interfaith marriages, but it changed now.

Within a month, in December, they celebrated their wedding at the Raffles Hotel with several high-profile celebrities as guests. The bride stunned the crowd with a white lace-shoulder gown that matched a long veil.

Greek designer Celia Kritharioti designed the dress. On the other hand, the groom also went full white tuxedo teamed with black shoes. As the newlywed couple stunned in their outfit, they cut the wedding cake with a sword and attracted everyone. Sergio gave a beautiful speech stating,

I really, really love you, and I am 100 percent sure I'm going to be with you pushing your wheelchair; well, the beauty response, I'm not in it yet.

The duo enjoyed their lavish ceremony to the fullest; every guest had the time of their life. The duo is now bounded in nuptial vows for more than a year and shares great understanding. They are not only husband and wife but do business together.

Before having a wonderful marital life with Sergio, Caroline was married. Previously, she accepted Cem Habib as her life partner, but all fell. Let's find out what happened. In the early 2000s, she met her first husband, a banker in England. Habib is on the CIS Private Equity board of directors. With so much common and understanding, they began their sweet love journey.

In 2004 after dating for several years, they exchanged their wedding vows. Their relationship led them to share three beautiful kids. Twins Zac Habib and Aaron Habib and daughter Yasmine Habib. In 2016, the family of five moved to Dubai after getting a huge job offer. However, after four years of living together in Dubai, the pair find their relationship difficult.

After fifteen years of marriage, they called it quits to their marriage. Their divorce was finalized in 2019, and they parted ways with a mutual understanding. Currently, the three kids live with their mother while their father, Cem, occasionally visits. Also, he pays her for child support and loves spending time with children in his free time. Regarding the split, the Ladies of London star stated

we have been married for 17 years, together for 19 and in that time we have shared countless special memories and brought 3 wonderful children in to the world. There is no big drama – we just simply believe we are better continuing our relationship as friends.

How Rich is Sergio Carrallo? Know About Caroline Stanbury's Husband's Net Worth

Madrid native Sergio Carrallo was focused on football from a very early age due to the air in Spain. He even played for clubs like Real Madrid C, Real Madrid U 19, and MB Mutiny Breidablik throughout his career. Now, he is a businessman and reality star and has grabbed a huge fortune. Carrallo, the ex-footballer, commands a net worth of $700,000 through his impressive career.

Sergio is affiliated with RHOD, Divorced Not Dead Podcast, and has added fortune to his account. His estimated annual income is over $90,000 per annum from his work.

Carrallo's wife, Caroline Stanbury, is a multi-millionaire socialite. Currently, she enjoys a $30 Million net worth which she earned through her impressive career. The Reality star has invested her money in several clothing and furniture lines and is gathering profit from it.

Caroline also runs podcasts and appears in reality TV shows like Ladies of London, This Morning, Million Dollar Listing Los Angeles, and many more. From her anticipation, she makes over $1 Million in a year. Further, she also bought a 20,000 sq foot multi-million home in Dubai in 2020. The family of five is now living a lavish lifestyle for sure.

Also, See: Is Lindsay Lohan Starring In the Real Housewives of Dubai?