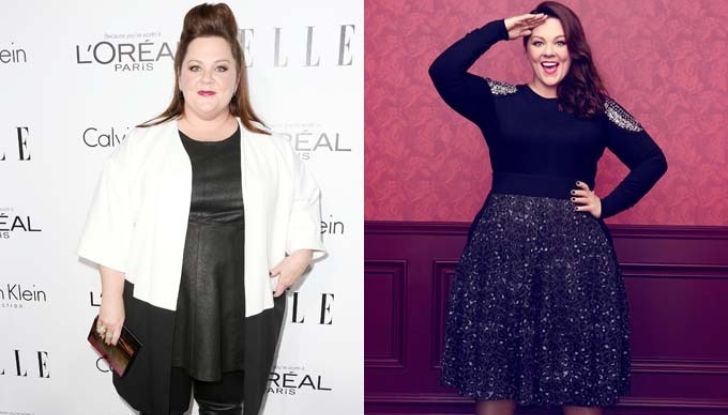 Melissa Ann McCart, professionally known as Melissa McCarthy, is an actress, comedian, writer, and producer known for her hilarious interplay in the 2011 hit Bridesmaid. She has been upfront about her relationship with her body, specifically the selective teasing she is subjected to being a chubby girl in an industry specially focused on women's appearance.

Born and brought up in a large catholic family on a farm in Illinois, Melissa is an alumna of The Groundlings in Los Angeles. Two Prime-Time Awards and two Golden Globe Awards winner, Melissa's story with her weight is a testament to how women are eventually brought down to their weight and looks. Ahead is the story of McCarthy's changing weight throughout her career and her message on body positivity.

After she landed herself the role of Sookie in the 2000 comedy-drama Gilmore Girls, McCarthy says she went on a doctor-supervised all-liquid diet and dropped 70 pounds in 4 months; talking with People Magazine thereafter, she tells. "I'd never do that again, I felt starved and crazy half the time."

"I'd never do it again, I felt starved and crazy half the time," Melissa on her attempt at dropping pounds in the past.
Photo Source: Vanity Fair

Married and mother of two, the actress tells she wasn't always a chubby girl. McCarthy was in great shape during her 20s, she recalls, she never appreciated her body, no matter what shape it adapted. "I've been every size in the world', says Melissa. Her story perhaps resonates with every plus-size girl in the world.

Check Out: Did Angela Deem from 90 Day Fiance Undergo Weight Loss? Find All the Details Here

During the advent of her glorious career, she launched her own clothing line, "Mellisa McCarthy Seven7," after facing trouble finding plus-size designer clothes.  The cover star of the Instyle Magazine in 2019 and now in 2021, McCarthy's transformed physique in the latter is notable.

When John Goodman was heavier, did anybody talked about his girth? Melissa.
Photo Source: Hollywood Life

She had taken a dig at Hollywood's peculiar treatment of heavy women in the previous shoot and the latest print, she has opined about Covid and the world's current affairs. "Not to be a jerk or single him out, but when John Goodman was heavier, did anybody talked about his girth?' she told Instyle in 2019.

The Power Couple, McCarthy, And Her Husband, Falcone!

McCarthy's love story with her now-husband Ben Falcone dates way back to when the duo was in The Groundlings. Called another power couple of Hollywood, not to mention hilarious, Falcone is also a comedian and actor. The duo has starred together in several films, with their latest being Thunder Force came out on Netflix in April 2021.

A love story that goes back to the advent of their Hollywood career.
Photo Source: Eonline

Parent to two daughters, Vivian and Georgette, McCarthy and Falcone, are each other's biggest fan; she calls her husband the dreamiest man. And there is Falcone, who doesn't shy away from glorifying his wife in public. McCarthy has also been candid about how her husband has been a strong force behind her in overcoming the insecurities, pressures her job and Hollywood have presented.

Don't Miss: Did James Corden Undergo Weight Loss? Find Out All About It Here

The couple together has created six movies, starred in ten, and launched their own production company 'On the day production". Married since 2005, Melissa took to her Instagram on October 8 last year and commemorated their 15th anniversary. She wrote, "15 years ago today, I married the kindest, funniest, weirdest human, grateful for every single day." Head to her Instagram @melissamccarthy to catch glimpses of the couple's perfect conjugal life.