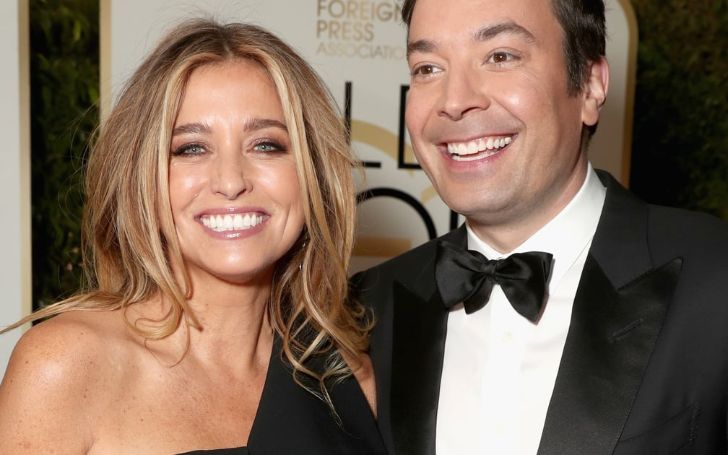 Nancy Juvonen is a Finnish descent, American film producer, better yet, known as the wife of SNL king, Jimmy Fallon. Juvonen is also the co-owner of a production company named, Flower Films with her fellow associate and Hollywood actress, Drew Barrymore. Both the women are known for their long lasting partnership and team up in their business.

Together the businesswomen produced some of our favorite box office hits like, ‘How To Be Single,’ ’50 First Dates,’ ‘Charlie’s Angels: Full Throttle,’ ‘Fever Pitch,’ ‘He’s Just Not That Into You’ and many more. It’s safe to say, Nancy’s build her own legacy besides the fame of her husband which is why today we course to breakdown the net worth of the American film producer.

Down The Career Lane of Nancy Juvonen, Bio

Juvonen is a 1967, May 18 born in Connecticut as a Finish descent. She is the daughter of former Marine Aviator, and now aviation industry executive William H. Juvonen. He’d just become an aviation executive just before he met his death in 2018.

The 5ft 4inch lady was a power pack ever since her childhood days. Her dad was a Stanford University alumnus but she chose University of Southern California instead to pursue a degree in Sociology and cooperative education. Even after graduating, Nancy worked odd jobs like at a ranch, as a private flight attendant, artist, assistant and many more.

How Did Nancy Juvonen and Jimmy Fallon Meet? Their Love Story Ahead

The 52 year old producer met the man of her life via her own brother, Jim who was a writer, producer on the sets of Mad Love. Nancy and Jimmy began their dating journey when they met at the producer’s birthday party thrown by her very own friend Drew.

Both the children of Nancy and Jimmy were born through a gestational surrogacy.
Photo Source: Daily Mail

After a few months of dating the TV host did a romantic show of proposing Juvonen around sunset with a smashing Neil Lane designed engagement. He proposed her at her family house in Wolfeboro, Lake Winnipesaukee, New Hampshire. Of course we all know the answer to that, a major Yes!

You May Also Like: Haley Joel Osment Net Worth "Find Out How Rich the 'Forrest Gump' Actor is"

Just four months of being engagement later, they took their wedding vows and married in a private ceremony on Necker Island in the Caribbean.Today the adorable couple shares two equally lovely children named, Winnie Rose who was born in 2013 and Frances Cole, born in 2014. Both the children of Nancy and Jimmy were born through a gestational surrogacy.

Both the husband and wife, are doing great in their respective work which is why their finances are now in an admirable condition. Nancy is the owner of her production company as well as ‘Clarence Clemons’ production company.

All through her investments and work, Juvonen is the holder of a whopping $20 million dollars. She lives a comfortable life with her kids and husband who also brings his share of massive net worth to the family.

Also See: Jerry Stiller was the Father of Ben Stiller, Here's What You Should Know About Their Father-Kid Relationship

Subscribe into Glamour Fame for and endless supply of articles on your favorite celebrity.