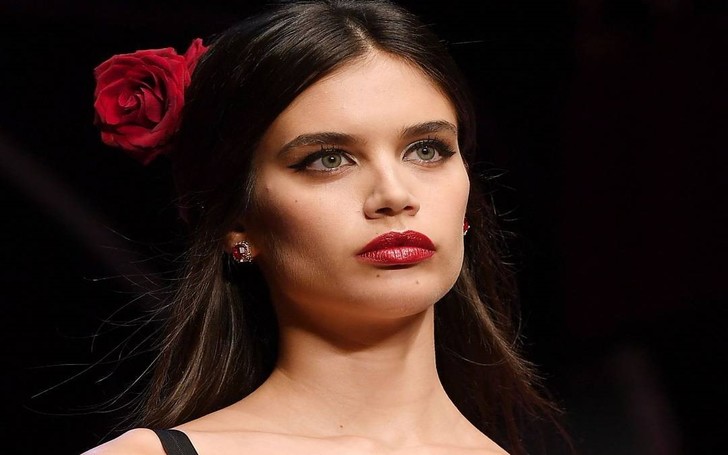 If one had a super lean and stunning body in similar to Sara Sampaio, then they would be flaunting them on social media too.

We actually wouldn't know how to act.

The supermodel once again mesmerized us with her ethereal beauty as she recently decided to showcase them on Instagram by putting on a new pair of lingerie she purchased from Victoria Secret.

Needless to say, she killed it in those daring pieces.

The 27-year-old Portuguese model looked fabulous as ever in two-piece black lingerie that featured several straps as it's highlight design.

Although the racy two risque pieces looked delicate in consideration that they only consisted of black straps, Sampaio ensured her fans that they were super comfortable.

In detail, the black lingerie set consisted of a bra with numerous straps that stretched up, under and in between her bust.

Likewise, her panties featured two more straps of the same fabric above the underwear that hung around her waist and hips.

Sara, further, kept her middle-parted straight espresso locks free as they cascaded down her back shoulder.

The 'Carga' actress went for a matching face makeover with the help of a bright red lip pout, eye shadow, and a thin eyeliner that added more glamour to her natural features.

Ready to show off her beauty and inclusively her new set of Victoria Secret's lingerie, the model struck a pose to take multiple mirror selfie with her black cased iPhone.

Noticeably, fans could see a tiny delicate golden ring on her ring finger.

Could the model be already engaged with her boyfriend of three years, Oliver Ripley.

Hopefully, she will let her fans know the good news soon.

And with no surprise, the steamy hot picture garnered Sara a nearly half a million likes on the photo-sharing platform in just less than a day.

Thousands of her fans took to the comment section to admire her beauty as one of them wrote: "A joyful dose of everything," whilst another added: "There’s too much beauty here, breathtaking!"

Interestingly, one fan, commented: "Tan lines are gonna be unreal,"

Could we disagree though?

Meanwhile, the black pieces are a new design exclusively from the pre-fall Victoria Secret's collection, as the model mentioned in the caption.

FYI, the bra is also available in green and red is priced at $80 whilst the panties costs $30.