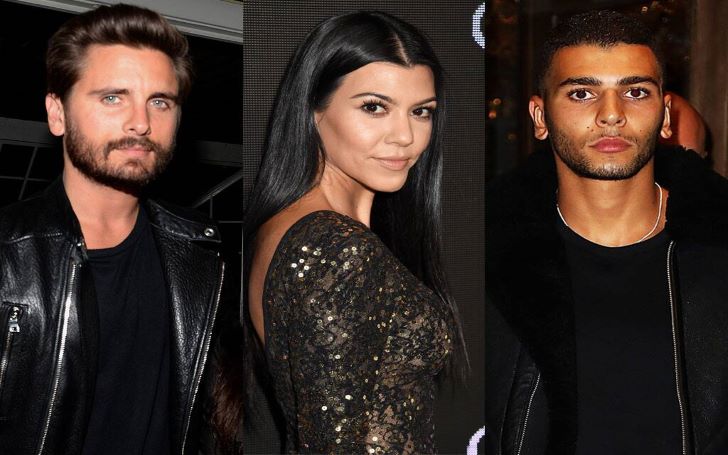 Kourtney Kardashian is more than happy for her ex-boyfriend Scott Disick and his current woman, Sofia Richie; however, Scott does not feel the same when it comes to Kourtney's bae.

Disick is not happy with Kourtney's on and off relationship with Younes Bendjima as he is worried that his children's mother is being used and exploited by a younger love interest.

Scott Disick is not happy with Kourtney's relationship with Younes.
Source: E online

However, he is not going to say anything to his ex-girlfriend as they both have moved on and think Kourtney can make her own decision. The insider said in an interview with In Touch,

Scott can't stand Younes, but he's not going to tell Kourtney what to do. He's moved on with his life, and so has she.

The former lovebirds dated for nearly a year before the reality star broke things off in August 2018 after he was seen out with other women, including Jordan Ozuna, who previously dated Tyga and Justin Bieber.

Kardashian first met Younes in Paris back in October 2016 — just one night before her sister Kim Kardashian West was robbed at gunpoint. Soon, they went public with their relationship after attending Cannes in 2017.

As per the source, Bendjima has been pursuing her for months and would love to get back together. Further, the two of them have been spotted on multiple date nights in the past two weeks, and her loved ones believe it's only a matter of time.

However, the 'Keeping Up With The Kardashian' star is taking her time as she has serious trust issues with him. She is not planning on jumping back into a full-fledged relationship — at least not any time soon.

Meanwhile, Disick is dating Sofia, 21 for nearly two years now, and he even credits the 21-year-old for making him a better man. He revealed in his new show Flip It Like Disick,

The truth was, without her, I was always looking for somebody or something. She's definitely been that little piece that's calmed me down and made me a better man and make things easier in my life.

What's more, even Kourt thinks Richie brings the best in Scott and is very happy for them. She also tags along Sofia with her family vacation and other events as a single-family unit.

Kourtney even tags along Sofia in her family vacation.
Source: Instagram

Besides, Kourtney and Disick dated for nearly ten years and shared a good bond even after their split. They co-parent their three children, Mason Dash Disick, 9, Penelope Scotland Disick, 7, and Reign Aston Disick, 4, together.

Well, it's left to be seen if Scott reveals his discomfort regarding his parenting partner's relationship with Younes or choose to stay mum.