Seven Popular Marvel Characters Who Defeated Thanos in The Comics 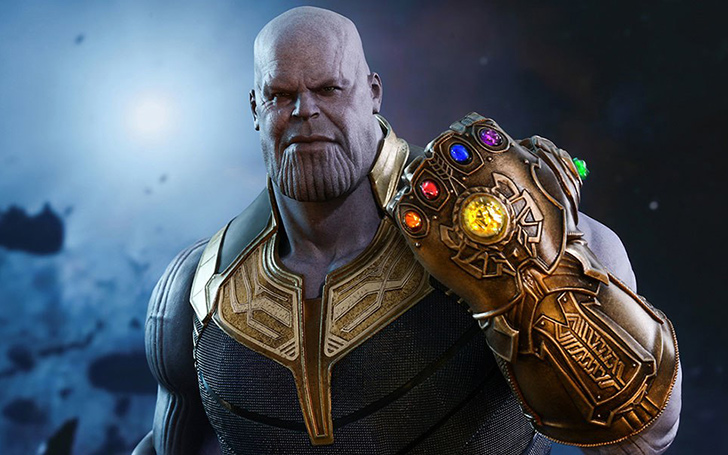 With Avengers: Endgame being just around the corner, and the worst happened like eons ago, we are now just in the wonder as to who might put the final blow on the culprit responsible for giving the biggest movie cliff hanger of all time.

Having seen Thanos finally doing what he long craved for (the decimation-wiping out half the universe), we now cannot underestimate the ken of the mad titan even by a bit. And although, even more, formidable forces and foes have been appeared in Marvel verse, for now, the crown sure belongs to Thanos. It's just a matter of question, for how long?

And there still might be more to tell from the death-worshipping giant despite it seems like there’s no damage he could do anymore. The bright side though; Avengers 4 is predicted to focus more on how to pin down the ominous god than just to mourn the deceased. 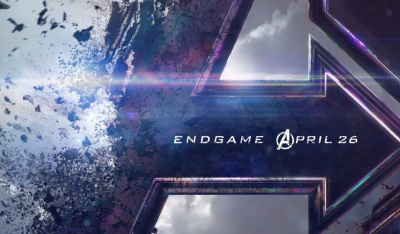 So what other better ways are there to prepare for such a thing than to recount how and most importantly by whom Thanos had been defeated in the past? While the films have pretty obviously differed from the source material in both big and small extent before, the Russos and their writing team of Markus and McFeely also frequently draw the plot and visuals directly from the comics.

So here take a look at these famous characters who have defeated Thanos before, and who may just do it again. 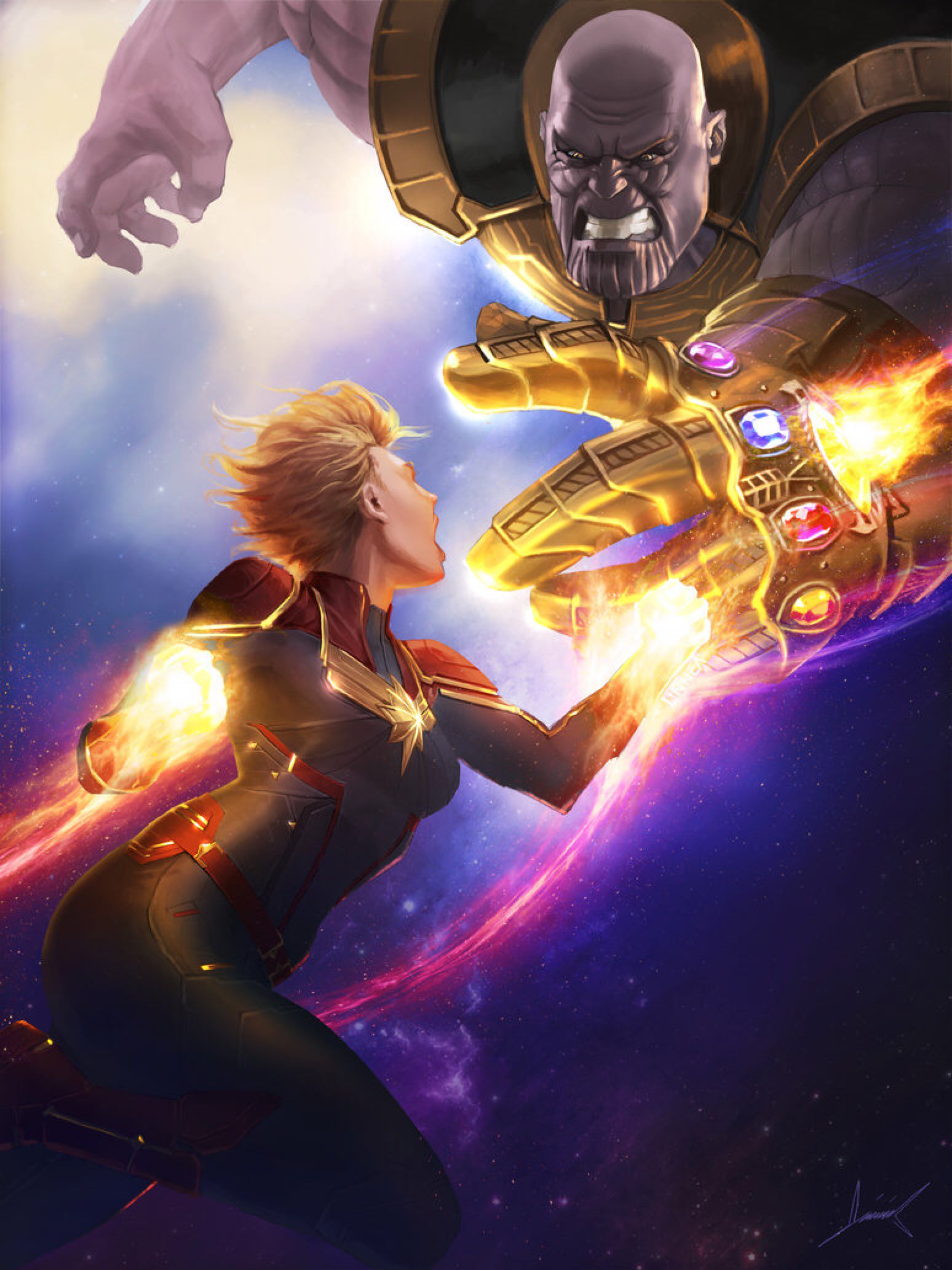 Captain Marvel is arguably one of the strongest members in the team Avengers. And if to talk from the live adaptation point view, she might be the only card remained up of brothers Russo’s sleeve in knocking down Thanos once and for all, given that all the existing members failed to do so.

With infinity war’s post-credit tease of Nick Fury seemingly calling in Carol Danvers, it appears that Captain Marvel is indeed in a whole new level in the league of Marvel superheroes (what else could possibly be the reason of showing star-spangled logo after the biggest destruction that has ever happened in the MCU movies).

In the comics, these two characters are often seen going hand in hand from their early respective issues. In fact, in Captain Marvel #33, Thanos is first narrated as the villain who defeats the first ever Captain Marvel ( Mar-Vel) and takes control over cosmic cube (recently seen in the movie as the space stones).

But Mar-Vel is also depicted so strongly on the rebound—almost single-handedly beating Thanos in such a fashion that even the titan’s alias death (also known as a character for mentoring Thanos in his early childhood) becomes ashamed of him. Worst; Death abandons Thanos after this defeat, which ultimately becomes the cause of his death. Though later death herself revives Thanos, only this time as a mortal being. 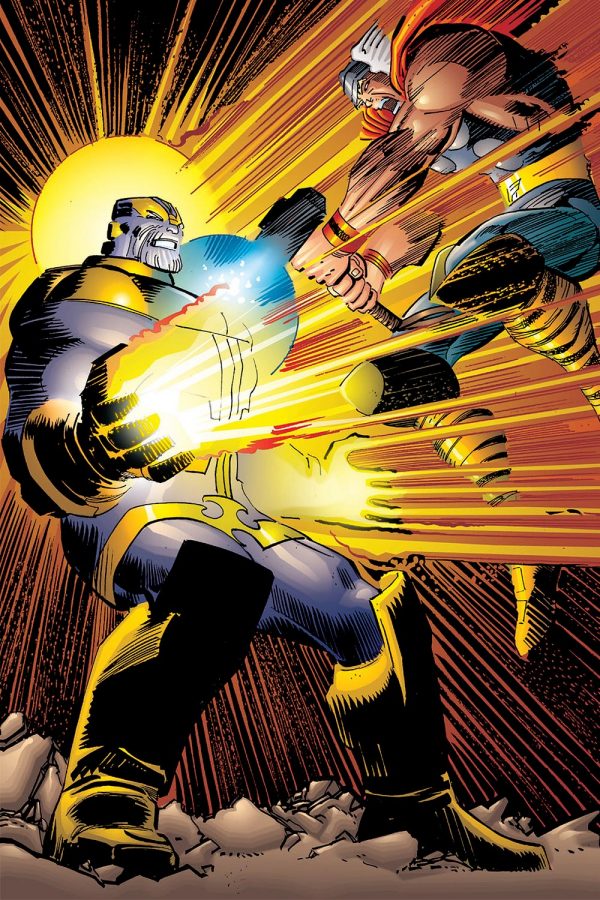 Thor is just one of another character who has had just as much as escapades with Thanos than Captain Marvel himself/herself. The god of thunder has gone toe-to-toe with the 8 ft tall beast many times throughout history, but the outcome has rarely ended well for the beloved Asgardian heir. In fact, Thanos has almost always bested Thor at his own game.

But on one particular instance, things have favored a bit differently for the Loki's half brother. As In Thor Vol. 2 #25, the Odinson is again seen facing the Mad Titan and this time, too the thunder-god looks as if he is nearly going to get beaten by Thanos. That is, until Xandarian anti-villain, Firelord (one of the former Galactus’ Heralds) shows up, gifting Thor with a new set of Asgardian armor, forged by Odin himself.

Upon putting it on, Thor once again levels up against Thanos, only this time, the former wins the duel by hammering Mjolnir down on top of Thanos' head and thus reducing it to a purple bloody pulp. So, yes, Thor too has defeated Thanos even if it was just for the momentary issue. 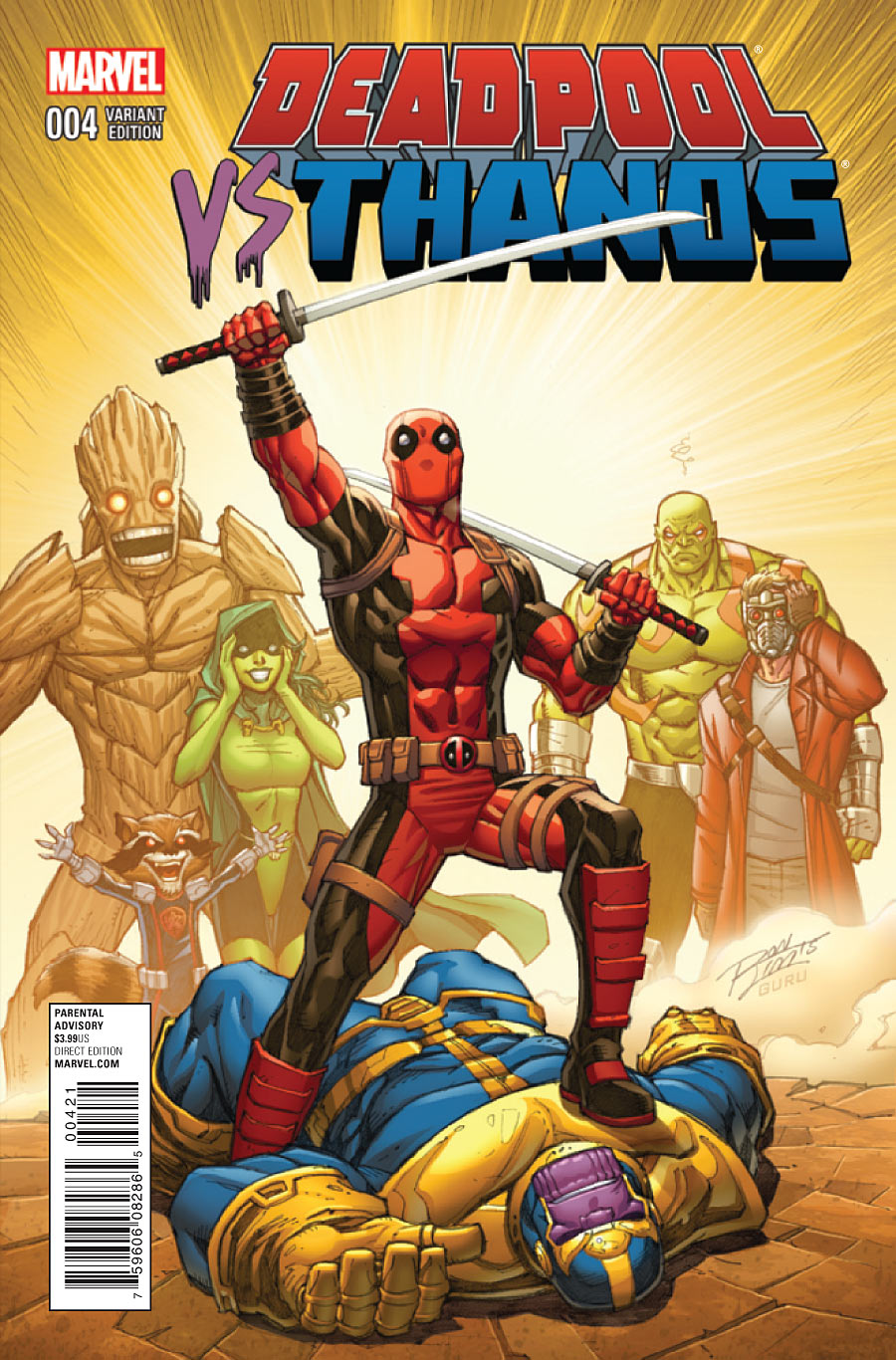 Wade t. Wilson is one of the few earthlings who has been able to pin down the lunatic alien in one or few versions of Marvel comics. Despite incessant rambling and inability to ever keep his mouth shut, Deadpool is formidably strong among the Marvel characters.

In Deadpool vs. Thanos #4, a cosmic-powered Deadpool and Thanos are seen fighting over Death's love while the prize lady stands and watches by side. What even more surprising is the fact that the Merc-with-Mouth actually wins over Thanos with “really” his mouth despite having an edge of his supernatural combat skills.

Wade points out—all Thanos is ever trying to do to seduce Death is to wipe half the universe. But by killing half the cosmos, he's also saving half the universe from Death. So he's arguably leaving nothing for the lady to do—given Thanos’ act of taking souls, interferes with her very own sole purpose of manipulating spirits and bodies.

Death buys into Deadpool's line of thought and hence leaves Thanos (again), which consequently leaves Thanos to grow weak and die without her. 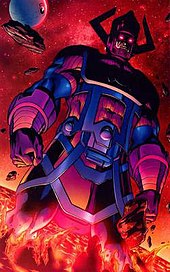 Often times story creators have interchanged their characters’ persona from protagonist to antagonist and vice versa. And in a similar yet rare switch-up, Marvel, to has made Thanos join the side of good for a moment or two during his mini-series, simply titled Thanos. During the episodes, an evil force corrupts the mind of other-big-baddie, Galactus (possibly the main showdown villain in Avengers’ phase 4), and convinces him to do Thanos’ bidding in order to free himself from his planet-eating-addiction.

You May Also Like: Avengers: Endgame Likely To Be 3 Hours After Highly Positive Test-Screening Reactions

When the titan god learns of this, he goes to confront Galactus to try and snap him out of it. The waylaying quickly turns violent, as Galactus attacks Thanos. Surprisingly, Thanos manages for a while against this near-limitless god-like being even without the gauntlet. He even takes on a full-on blast of Galactus' power at one point.

But after multiple attacks from such a powerful force, Thanos alas gets outdone by the galactus—with one final energy blasts, flooring him and leaving him all worn out and bruised. As a matter of fact, during the end of this battle, we can even see the rugged Thanos doing sweet-talk/beg to Galactus for sparing his life. 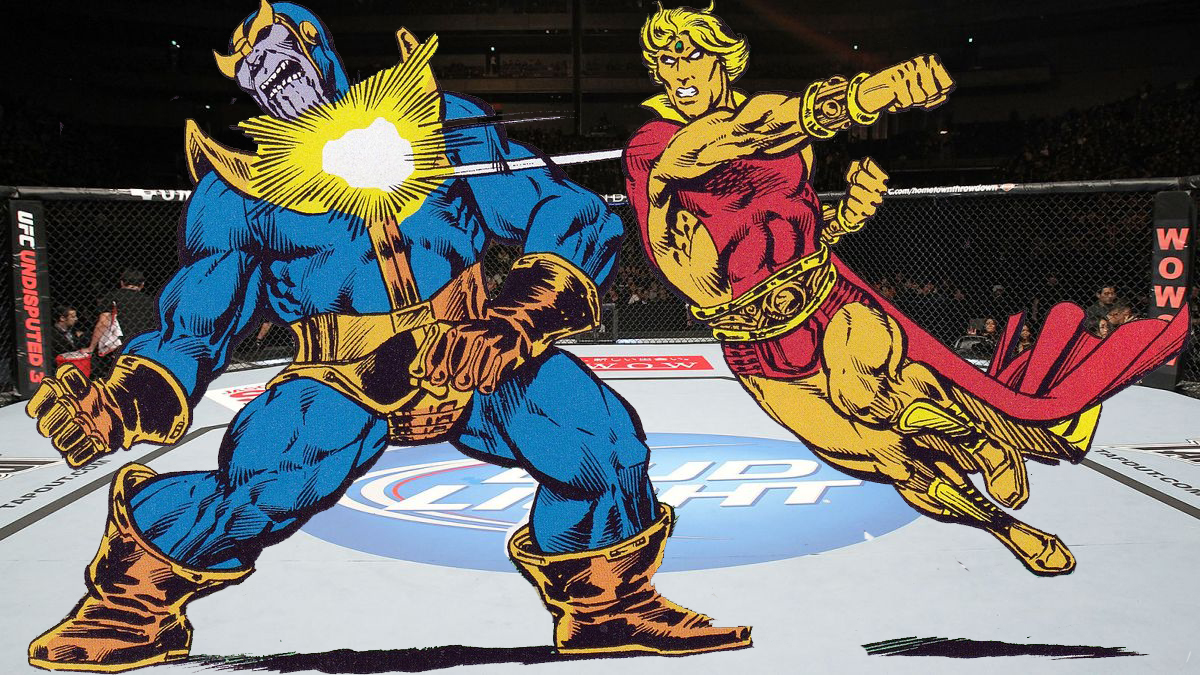 Warlock Defeats Thanos with the help from Spiderman
SOURCE: Fun with CY

One of the few recent heroes to be teased in the MCU’s post-credit scenes (Guardians of the Galaxy vol 2), Adam Warlock, has been often described in the comics as a perfect human being, and the pinnacle of future for human evolution.

Having said that, it's fortunate that the golden gladiator is for real on the good side.  Much like captain marvel and Thor, Thanos has a history with Warlock that goes back to decades. In fact, in the original Infinity Gauntlet storyline (the primal plot inspiration for the movie infinity war), Warlock was the only ‘might’ able to truly oppose Thanos, once he had assembled all of the infinity stones.

Even in the other storyline—Marvel Two-In-One #2, Thanos appears to be all-powerful after assembling all six gems in the gauntlet. But in this particular issue, Thanos is first seen defeating Adam Warlock and imprisoning him within the Soul Stone. However, Spider-Man later barges in and pulls the Soul Stone loose, freeing Warlock's soul from it.

After the liberation, warlock hits back at Thanos with such a force that he literally ends up turning Thanos into stone. The Avengers then celebrates the day and even give Adam Warlock's body a fittingly heroic funeral, as his soul returns to the alternate plan within the Soul Stone thereby finding peace, while Thanos being doomed to an eternity in stone.

Of course, eternity doesn’t last forever. But this time it is shown that it does last for a surprisingly long time until it is later shown that Thanos again returns after the 23 years from his fight with warlock—this time being even more powerful. 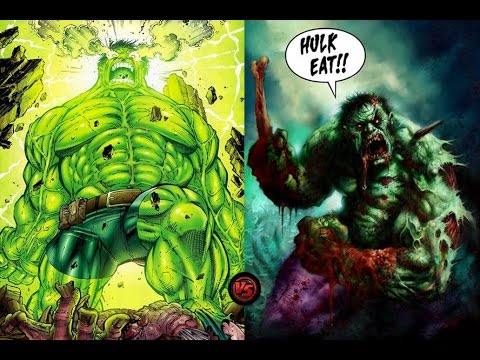 Up until the very first Avengers' movie, in the Avengers (2012), Doc Green was depicted as someone who you wouldn’t want to mess with, even in your wildest dream. But when 2015’s Avengers; age of Ultron showed the battle of Johannesburg, we were compelled to think “if Hulk is even that invincible?” and later when we saw Thanos piling down the big green in the infinity war—for the time being, we were almost ready to believe that the hulk maybe isn’t that of an indestructible hero. However, it isn’t much of a surprise, given the fact that—that even before Thanos, Hulk has been beaten many times in the comics, not to mention, too often.

Yet it isn’t so time hasn’t favored the hulk at all. In Marvel Zombies 2 #1, the entire universe gets taken over by the so-called zombie plague. The epidemic becomes the worst nightmare when it gets joe to fix it, consequently making him go beyond wild.

Hulk then goes from all that wreckings to even devour people (Hard to believe: Hulk even eats off silver-surfers head thus acquiring the cosmic power). Meanwhile, a group of zombified characters discusses whose flesh they are going to have to eat in order to survive. Thanos makes a not-so-subtle-hint that he thinks its Hulk's fault that they are so scarce on resources because of how much he is eating.

The Hulk, annoyed by provocative faces comment, then thrust his green fists straight through Thanos' head which eventually becomes the end of zombie Thanos.

This has to be, without a doubt, one of Thanos' most surprising and humiliating defeats. In this version, we can once again see the purple behemoth in pursuit of the Cosmic Cube. What’s so shocking, however, is in this particular endeavor; Thanos uses the infamous Thanos-copter (his first mistake that might count as the first cause of the defeat alone).

Having the Cosmic Cube in hand while onboarding the copter, he becomes utterly out of the league to the Cat and Spider-Man.

That is until the mad titan creates an earthquake, which not only affects his enemies but also caused the Cosmic Cube to fall out of his hand. Spider-Man then tells him, “You were too tricky for your own good, Thanos!”

The hornet picks up the Cube, wraps Thanos up in the grass, and then the police leads Thanos away in handcuffs (an extreme of ridiculousness, not even Hollywood's worst directors would consider of saying to a toddler).

Also Read: Avengers: Endgame Getting an Intermission Might be a Terrible Idea

It's a ridiculously odd little story, completely differing with the Thanos we've come to know. And, yes, this particular defeat doesn't say much about Thanos, except maybe that sometimes, even the man with a plan might not feel like trying very hard for the victory. Nevertheless, this defeat at least represented a very human character taking down a powerful unearthly evil.