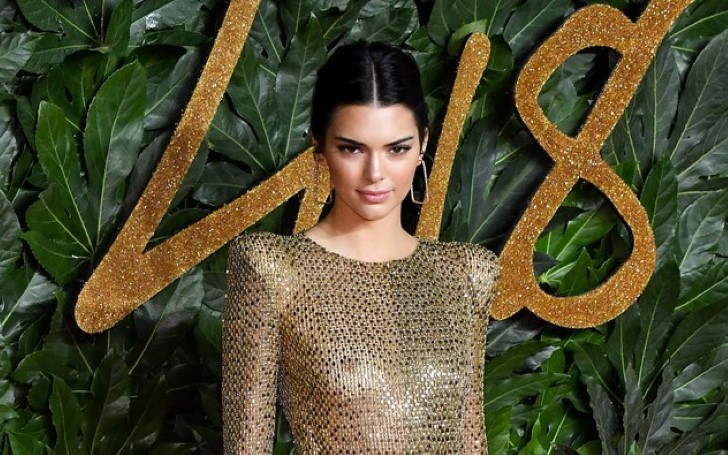 Keeping Up With The Kardashians star, Kendall Jenner grabbed the attention at British Fashion Awards.

Supermodel Kendall Jenner made sure that all eyes were on her at The Red Carpet of the British Fashion Awards on Monday in London.

The 23-year-old star has shown off her underwear in a see-through gown. She even flashes her nipples.

Kendall at the British Fashion Awards in partnership with @swarovski 😍🔥 She is wearing a @julienmacdonald gown for the night. 👍🏻 or 👎🏻? Follow @voguezine for more

Jenner who is reported to be dating Basketball player Ben Simmons wore a backless Julien MacDonald see-through mesh gown on 10th December 2018 in London at the award show. She was looking stunning in the dramatic gold dress with a hip-high split and the long sleeve.

You Might Like: Kim Kardashian Flashes Cleavage in Low-Cut Versace Minidress in New York Heads at the Italian Fashion House’s Runway Show in New York

The whole look was teamed with nude heels and a hoop earring and hair kept low bun. She not only showed her underwear but also flashes her nipples in the see-through floor-length gown.

This is not the first time, Jenner went braless on the red carpet. At the Cannes Film Festival 2018, she wore sheer Alexandre Vauthier mini dress which featured gauzy, glittery fabric draped over her figure.

A post shared by KendallJenner/Bella-GigiHadid (@kendallhadidss) on May 11, 2018 at 1:27pm PDT

Underneath the transparent dress, she wore a nude underwear and that was it. She completed the outfit with a black heel.

Earlier, in 2017 Met Gala she wore a black ombre gown which contains 85k hand-placed crystals and an asymmetrical cutout from her collarbone down to her hipbone.

Spoke too soon, Kendall Jenner just took the naked dress to a whole new level at the 2017 #metgala pic.twitter.com/S9Hx4S7q91

Kendall's backless gown showed off her diamond thong and wore nothing at the top.