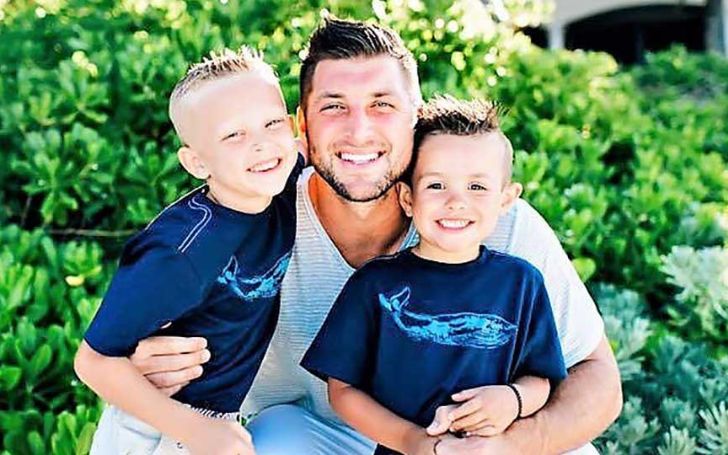 Who are Tim Tebow's Kids? All Details Here!

The Heisman Trophy winner, Timothy Richard, known as Tim Tebow, is an American athlete. The 25th person to be drafted in NFL Draft 2010 is renowned as a quarterback.

Besides being a professional football player, the generous individual is pretty active in social works and charity. While he earns quite a lot of money, he gives away a lot too. Tim, homeschooled with Christian beliefs by his parents, definitely assisted in the athletes' indulgence in giving out to the community.

Tebow, born on August 14, 1987, in Manilla, Philippines, grew up in Jacksonville, Florida. The youngest of five children, Tim relishes a comfortable life with his wife. Continue reading to know about Tim Tebow's family. Does he have kids?

Does Tim Tebow and His Partner Have Kids?

The University of Florida alumnus announced his engagement with the former Miss Universe Demi-Leigh Nel-Peters on January 10, 2019. The pair finally, after a year, walked down the aisle with a short ceremony on January 20, 2020, in the model's hometown South Africa.

Tim Tebow is the author of the children's book "Bronco and Friends: A Party to Remember."
Photo Source: NBC News.

Despite relishing the idea of one day having kids with his lover, as of 2021, Tim Tebow doesn't have children of his own. Not forgetting the fact that the athlete firmly believes they'll conceive soon as he quotes, “We are excited for when it’s just the right time. Hopefully, we’ll both know when that is.”

The SEC Network analyst is a devoted philanthropist who's written many books, including the recent children's book "Bronco and Friends: A Party to Remember." The former Florida Gators player included the character in the book in honor of the ill children Tebow acquainted with during his journey as a social worker.

As Tim quoted, "This book was really written to honor bronco and these Wish children that fought so courageously and all of them have incredible, amazing stories that I wanted to honor." Let's hope many children enjoy the book.

Tim Tebow, the author of books like "Know Who You Are," "This is the Day." "Through My Eyes," and "Know Who You Are," "Shaken" recently went through a rather discomforting moment in his career. The religious individual had a major comeback plan in NFL as the brand ambassador of Clean Juice, which didn't end up as expected.

However, Tim Tebow Foundation's initiator continuously posts on his social media handles speaking on human rights and actively advocating donations to aid needy individuals, especially children. Let's hope the athlete follows his passion for giving out to society in the coming days.

Recommended: Does Yeonmi Park Have Kids? Learn About Her Family Life!

For more information on your favorite celebrities, visit Glamour Fame!