home Entertainment What is Val Kilmer's Net Worth in 2021? Learn About His Earnings and Salary Too

What is Val Kilmer's Net Worth in 2021? Learn About His Earnings and Salary Too 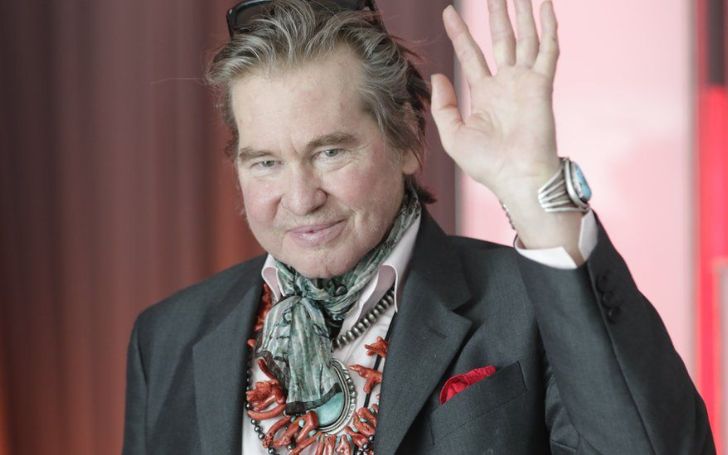 What is Val Kilmer's net worth in 2021? All the details here!

The famous batman, Val Kilmer, who also happens to be the highest-paid actor back in the mid-1990s, won a two-year battle with throat cancer. The accomplished actor is set to have a strong comeback in the coming days.

Val Edward Kilmer was born on December 31, 1959, and grew up in Los Angeles. The American actor started his career with theatre and slowly increased his horizon, bagging blockbuster hits like The Doors (1991) and True Romance (1993).

The grandson of a gold miner, Val's passed down with a wealthy bloodline, no question on that. However, the actor accomplished an ample amount to himself after all these years of success. Continue reading to know more about Val Kilmer's net worth.

The talented actor, Val Kilmer, who is most appreciated for portraying the role of Caped Crusader's accumulated a handsome amount to his account. The Top Secret alum has accumulated a whopping net worth of approximately $25 million.

Val's probably inherited a huge amount of property as the actor sold his 6,000-acre ranch in New Mexico; Kilmer often spent his time there. Despite selling the beautiful land that he hoped to turn into a resort for $18.5 million in 2011, the rich landlord still owns a few parts of it.

The outspoken actor who doesn't fret discussion on money gained all the ransom working in hits like Batman Forever which earned him $7 million, followed in another $7 million and $9 million for performing in smash hits like The Saint and At First Sight, respectively.

Recommended: What is Madelyn Cline's Net Worth in 2021? Learn About Her Earnings and Salary!

Not to mention the music production, brand deals, and myriad other sources of income that aided in his wealth. Val's net worth is predicted to increase soon due to his upcoming projects.

The famous actor Val Kilmer has lived a luxurious life, but Saint star underwent a challenging phase in his life in recent years. There were rumors about Val's health after the A-list star got hospitalized, which he denied.

While in reality, Kilmer survived a tough battle with Throat Cancer for two years, according to The Hollywood Reporter. The post-recovery phase seemed even more challenging as the actor stated that a feeding tube is used to feed him as he cannot eat any longer.

Recommended: What is Paul Mescal's Net Worth in 2021? Learn About His Salary and Earnings Here!

Despite the heart-throbbing medical journey of the actor, Val's back on his track as the actor's documentary named Val recently got released on Amazon Prime and US cinemas. Let's hope the actor showcases more of his talent out to the world and receives blessings and love.