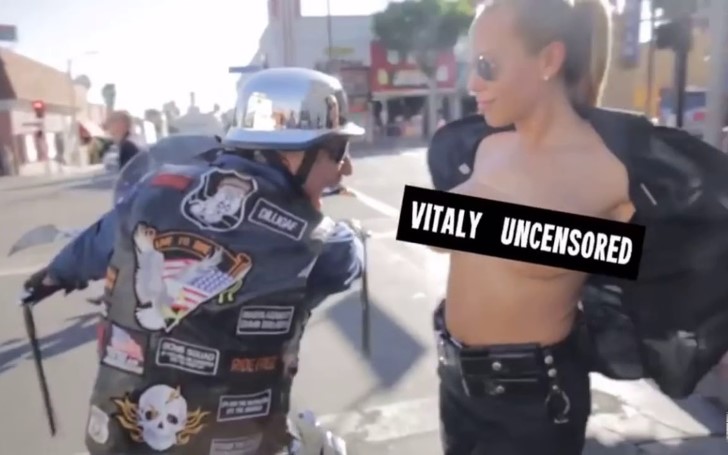 Do you know everything about Vitaly Zdorovetskiy' X-Rated Website? We've got you covered!

Unless you've been living under a rock for a while, you must be quite familiar with the voluptuous lady who ran across the pitch of the ongoing Champion League's final. The blonde hottie just took over the match as Tottenham and Liverpool were busy in their game and turned some heads of the players in the process.

Although Liverpool hoisted the UEFA Champion League finals Kinsey Wolanski was the one who stole the show with her the aid of her astounding physical features and that skimpy swim-suit with the words "Vitaly Uncensored" on it, which wrapped eye candy. The beauty's wrath on the football ground lasted till she almost made her way to the half line. Referees then took it upon themselves to escort her off the field while the audience and the players alike watched in awe.

The audience members were taken by major surprise with this takeover but little did they know that it was an elaborately planned scheme to popularize a new brand. The master plan held in place by the YouTube phenomenon Vitaly Zdorovetskiy was a marketing strategy to bring his new venture Vitaly Uncensored into the limelight.

With the running beauty being viral all over the globe, the website of Vitaly Zdorovetskiy titled 'Vitaly Uncensored' went on to explore new heights. With its newfound skies, the website is providing the viewers a platform to indulge in some pranks. Don't worry it's your run of the mill prank, they are explicit in nature. As the majority of fans claim, it will just blow you away!

Check out: The trailer of Vitaly Uncensored

The website allows you to sign up for free to gain access to the full content which you could get a glimpse of right from the moment you decide to visit the site. The personalized streaming site of the YouTube phenomenon is bound to be big, both literally and figuratively. It would be safe to say, Model Kinsey Wolanski and her boyfriend Vitaly pulling off that $4 Million stunt during the Champions League final was nothing but fruitful.

The prankster's sizzling content finds a new home in the website because of the obvious restriction that is levied on the videos Vitaly uploads to his youtube channel and to quote his actual words the content is "too explicit for YouTube" Given the obscene nature of the content, the website is soaring much higher. The pace also seems to be in the same trend.

Vitaly's move to shift his career from mainstream YouTube channel VitalyzdTv to a more independent venture launching his own streaming platform is seen as a keen move on his part. Given the newfound popularity through the recent Champions League Final fiasco led the website and Vitaly's image past the seas.

Explicit pranks are a rather untaped content in the world of both pranks and explicit contents. With the huge potential audience expected to be reached in the near future the pool of possibility is not running out anytime soon for Vitaly Uncensored.