home Entertainment Which Player Is Gonna Receive A Kiss From Soap Star Stephanie Cayo After Peru Sealed A Place Into the Copa America Final?

Which Player Is Gonna Receive A Kiss From Soap Star Stephanie Cayo After Peru Sealed A Place Into the Copa America Final? 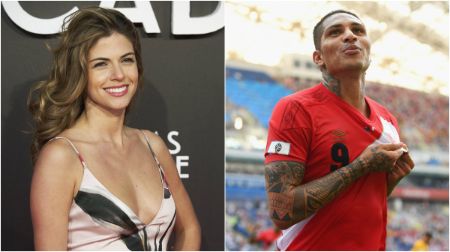 Who is going to receive the kiss from Peruvian soap actress, Stephanie Cayo.

Peru are in the final of Copa America 2019. Ricardo Gareca boys defeated Chile 3-0 in the semi-finals of the ongoing South-American tournament on Wednesday (local time) and now will face hosts Brazil in the ultimate showdown.

The second part of the semi-finals was played at the Arena do Gremio stadium in Porto Alegre.

The game started at a quick pace as both teams sought to play with a vigorous mindset.

Peru broke the deadlock in the 21st minute of the match as Edison Flores netted the first goal for the team.

Peru kept on steering the ball inside Chile's half.

Also Read: Megan Barton-Hanson Exchanged Series of Flirty Texts with Football Star Dele Alli After They Met on a Recent London Night Out

In the 38th minute of the match, Peru were able to extend their lead as Yoshimar Yotun scored the second goal for the team. As soon as the second half started, Chile made their first substitution as Angelo Sagal came to replace Jose Pedro Fuenzalida.

Chile came out all in the second half and they created a chance in the 51st minute as Eduardo Vargas made an astonishing move yet was denied by the crossbar.

Recommended: Ed Sheeran Adds Football Pitch and Private Beach To His Property in The UK

Peru were able to hold off Chile's attempts and in the dying moments of the match, Peru's Paolo Guerrero sealed the game after registering the third goal for the team sealing the win for the side.

Aside the anticipation and joy, Peruvian team squad may have one another thing to be excited about; Stephanie Cayo.

Prior the Peru’s face-off against Chile, Cayo, a popular Peruvian soap actress had offered an unusual incentive to encourage her country’s footballers to give their all to reach the Copa America final.

The 31 year old actress promised to kiss the player who would win the match for her country.

“We want to give a kiss to the Peru national team. I’m seriously thinking about offering a kiss (obviously with permission) to whoever is responsible for beating Chile on Wednesday,” Stephanie had written on Twitter to her almost 800,000 followers.

Cayo is a soap actress and singer who is popular in both Peru and Colombia. She’s currently featuring in the Netflix series “Club de Cuervos” (crows club).

And now that Peru has done it, the question remains as to whom this diva is going to share her lips with. Is it going to be for the whole 14 players who contributed in taking the nation to the final or just the goal scorers? If it’s the latter, then Guerrero, Flores, and Yotun are in for quite a treat.

Among the three stars, Flores and Yotun are pretty much single so as to go and have a smooch with Cayo without having offended any of their girlfriends. Or, Guerrero’s girlfriend, Thaisa Michel Lea could go okay with this and for just once let have her man slide with it.

But we also cannot ignore the fact, that Stephanie Cayo is happily in a relationship with her husband, Chad Campbell. Stephanie married American business Campbell in January 2018. There’s a least possibility of Cayo not keeping up with her word. That said, its completely up to the three players whether they are going to have a snog with the blonde beauty.

Peru will now take on Brazil in the final of the Copa America on Sunday, July 7 while Chile will face Argentina in the 3rd/4th place playoff match on July 6.