home Entertainment Who is Justin Thomas’ girlfriend Jillian Wisniewski? How Did the Couple Meet?

Who is Justin Thomas’ girlfriend Jillian Wisniewski? How Did the Couple Meet? 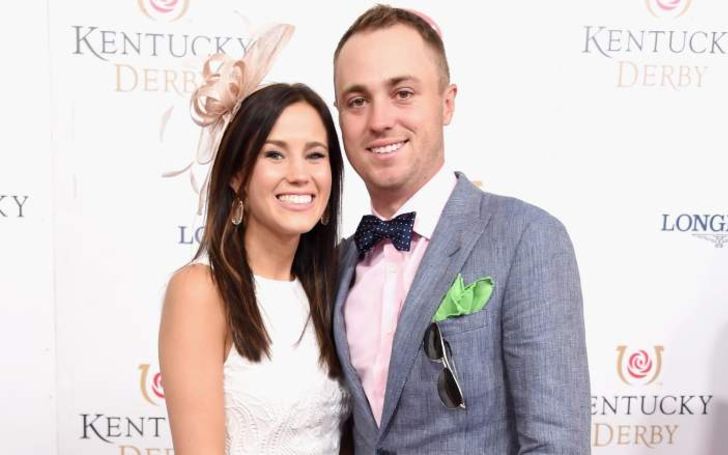 Justin Thomas is an American professional golfer who plays on the PGA Tour. He is a previous World Number One in the PGA ranking. In his distinguished career, he has won five PGA Tour events.

Everyone knows Thomas's career as he holds some phenomenal yet rare record of being the number 'One' golfer in the world. But here, we're not discussing the top-notch golfer staggering career details and records, instead of focusing on 'The PGA Player of the Year, 2017', relationship details with girlfriend Jillian Wisniewski.

Who Is Justin Thomas' Partner?

Justin Thomas is engaged to his longtime girlfriend turned fiance Jillian Wisniewski. They were first spotted together in 2016. The couple is yet to share the story of 'how they met each other.' They got engaged in November 2021.

A snippet of Justin Thomas and his fiancee Jillian Wisniewski attending a special ceremony.
SOURCE: Golf

Accounting to her LinkedIn profile, she is an experienced Business Manager who has excellent skills and experience in marketing, and marketing experience.

Check Out: How to Get Out of a Toxic Relationship? These Simple Steps Might Save Your Life!

Shares Immense Love and Bond Despite Both their Hectic Work Schedules

Thomas significant other almost missed one of his groundbreaking moments while taking a later flight. However, she made it to the Quail Hollow Golf Club in time as Justin was about to lift the Wanamaker Trophy.

Jillian famously almost missed Thomas winning his first Major title in 2017 at the PGA Championship. Nevertheless, she made it.
SOURCE: Golf Channel

Justin cited the moment and shared on an event,

I truly felt like I was going to win. I remember my girlfriend was supposed to fly out at about 7 pm and I was like, you need to change your flight to later, I just feel like I don't want you to miss this. I feel like I'm going to get it done.

Despite both the partners have their own busy schedule, the lovebirds often travel on vacations together and manages time by any means, which is one of the best parts of their relationship.

Picture of Justin and Wisniewski traveling on a beautiful vacation near an island.
SOURCE: @justinthomas34

The couple is yet to get married and be the father and mother of their children. Well, we sure wish to see them tie the knot soon and start a happy family.

We hope you enjoyed the article; stay tuned for more Entertainment updates on Glamour Fame.