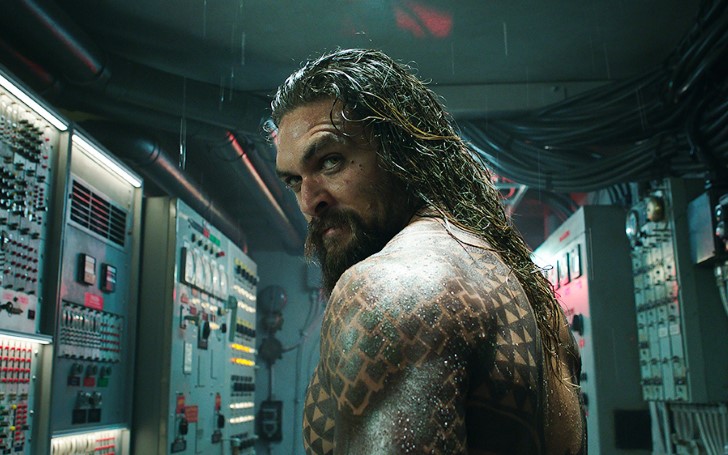 The first reviews for Warner Bros and DC’s Aquaman are in, and critics are praising James Wan’s worldbuilding, and Jason Momoa’s performance.

The Amber Heard and Jason Momoa starring movie Aquaman is based on the original story of the Justice League's trident-wielding hero, taking viewers into the seven kingdoms of Atlantis and entrenching them in ocean-dwelling politics.

The DC superhero movie "Aquaman" has been received positively by the critics. The reviews praise James Wan’s world-building, the visual effects, and Jason Momoa’s performance and criticize the length, the screenplay, and the nature of the plot.

Here are some reviews for the movie "Aquaman" which is to be aired on 21 December 2018.

“With the exception of ‘Wonder Woman’ and ‘The Dark Knight Rises,’ every DC movie of the past decade has suffered Marvel Imitation Syndrome. This unique corporate malady takes a successful formula, darkens the frame, and deadens the story, under the assumption that audiences won’t notice. By those standards, James Wan’s ‘Aquaman’ is a cut above: The ‘Conjuring’ filmmaker abandons the witless mess of ‘Justice League’ to craft a colorful, vibrant ocean fantasy, but the considerable effort to improve on a leaden franchise can only float for so long before familiar baggage sinks its potential. Hobbled by a messy screenplay, paper-thin characters, and a hodgepodge of unimaginative showdowns stretched across bloated running time, ‘Aquaman’ is the latest example of a franchise that keeps chasing its competitor’s tail.”

“Audience reactions to blockbusters are difficult to predict, but it’s unlikely anyone will come out of ‘Aquaman’ asking ‘Is this all there is?’ Not only does the new comic book superhero movie from the DC Extended Universe clock in at an over-extended 2 hours and 23 minutes, it throws everything at us except an undersea kitchen sink…It’s almost as if director James Wan and screenwriters David Leslie Johnson-McGoldrick and Will Beall feared this would be their only shot at making an ‘Aquaman’ movie and shoehorned every last idea they had into the mix.”

“‘Aquaman’s’ greatest superpower isn’t controlling the seas or communicating with fish – it’s the ability to embrace and absorb his own inherent cheesiness and use it to make himself more entertaining to watch. His first solo movie is often corny, but it owns all that with the audacity and fearlessness to just go for it. This James Wan-directed DC film declares to the world that this is a giant B-movie where krakens are voiced by screen legends and characters ride seahorses into battle, and it’s not going to pause to let you dwell on any of that. It’s precisely because it’s so damn zany, unafraid to embrace its comic bookiness, and is just plain out there that ‘Aquaman’ is a blast.”

“I just experienced ‘Aquaman,’ quite possibly the first major release film I’ve ever seen that felt like not a single idea from the conception phase was vetoed for being too insane or over-the-top. Yes, an octopus will play the drums. Yes, Julie Andrews will voice a Lovecraftian sea beast who lives at the Earth’s core. Yes, there will be crab people, yes, there will be gargantuan shrimp used as war machines, yes, we will ask audiences to believe that Patrick Wilson is Jason Momoa’s younger brother. Yes, to every single idea that might entertain the audience over ‘Aquaman’s’ genuinely batshit two-hour-plus runtime. Plot-wise, the result is a hot, foamy mess, my friends, but a mess that washed over me like a tidal wave, a mess so wild and candy-colored and eager to have a bitchin’ time that it’s some of the most fun I’ve had at a theater this year, anchored by a Momoa who is having the time of his goddamn life and director James Wan‘s genuinely gorgeous vision of an entire universe under the ocean waves.”

You May Also Like: Kevin Hart Deletes Homophobic Tweets Before Hosting 2019 Academy Awards

“Jason Momoa’s hair is a force of nature, a fantastic anomaly of power, as if forged by the fury of the sea and thunder that has been documented in Greek myth. His mane, wet, is the color of dark wood, glimmering with beams of honey, and falls just past where his barn door shoulders stop flexing. It moves with accuracy and perpetual motion, like a flag — a flag that represents a country of beauty and muscle — caught in a majestic breeze. I’ve spent a lot of time thinking about Jason Momoa’s hair because ‘Aquaman’ is two hours and 22 minutes long. That’s a particularly long amount of time to spend with any superhero, aquatic or otherwise, and perhaps a little too long, considering how much this movie could have been slimmed down and streamlined.”

“The movie has everything: giant seahorses, lasers, de-aged Willem Dafoe, a Lisa Frank color scheme, more lasers, an Indiana Jones temple raid, Julie Andrews, an octopus playing the drums, even more lasers, and my undivided attention for two and a half hours. Every second is overflowing — and thank goodness for that. A beaming sense of fun is a through-line for director James Wan, who has become the go-to guy in Hollywood for bringing franchise-ready worlds to life (‘Saw,’ ‘Insidious,’ ‘The Conjuring’) or giving tired ones an extra boost (‘Furious 7’). His previous work seems to have earned him carte blanche in the DC sandbox — ‘Aquaman’ reaches big-budget heights (and depths) that only filmmakers like Pirates of the Caribbean trilogy director Gore Verbinski and the Wachowski sisters have had the cred to pull off.”

“After appearances in two earlier films, Batman v Superman: Dawn of Justice and Justice League, ‘Aquaman’ now gets his own origin-story showcase in the DC Extended Universe, a story of his infancy and childhood that kicks off like a laugh-free version of Ron Howard’s Splash. Despite some engagingly surreal moments, heartfelt environmentalist gestures, big-name supporting roles and occasional flourishes of marine camp, this is a let-down: a laborious, slow-moving and dripping wet film, barnacle-encrusted with solemnity and with a ripply-underwater production design that looks like a giant version of the kitschy items that you put in fish-tanks. And Amber Heard turns in a performance as King Nereus’s daughter Mera that is about as relaxed as her appearance in the famous ‘hostage video’ she made with Johnny Depp to apologise for infringing Australia’s rules on importing pets.”

“There’s a scene that comes early on in the goofy, tonally bizarre ‘Aquaman’ where Jason Momoa’s half-Atlantean sea-hunk makes his first big entrance by boarding a Russian submarine that’s been hijacked by hi-tech pirates. He’s arrived to dispense his signature brand of fishy whoop-ass. The shirtless superhero leaps down through the top hatch, turns to the lead bad guy (who will later become ‘Manta’) and uncorks the one-liner: ‘Permission to come aboard.’ Momoa delivers the cornball quip with a Dwayne Johnson-like smirk, then whips his long hair like he’s shooting an Axe Body Spray commercial as a thick heavy metal guitar riff is struck. I laughed, but I’m still not sure if I was meant to. That pretty much sums up every minute (and there a lot of them) in director James Wan’s new DC action-comedy folly. It can’t decide if it wants to be silly or serious — a superhero movie or a parody of one.”

“If you’ve ever wondered what pure joy looks like on screen, look no further than the latest film in the DC Universe, ‘Aquaman.’ It’s littered with moments that marry grand spectacle, rousing music, and dramatic stakes with results sure to elicit ear-to-ear smiles from anyone from ages 8 to 80. Director James Wan (‘Insidious,’ ‘The Conjuring,’ ‘Furious 7’) has infused his DC adaptation with a flair we rarely see in filmmaking these days. It’s as if, with every single take, he said: ‘Well, if we’re going to make a movie about a muscle-bound man who talks to fish, let’s make this really crazy.’ Then you get scenes of two characters kissing while the camera does multiple 360-degree circles around them, complete with massive explosions and frickin’ laser beams whizzing by their heads. It’s bonkers. It’s bananas. It doesn’t always work but when it does, oh wow, is it fun.”

The reviews the movie "Aquaman" has received so far is more positive than the middling response received by Man of Steel and Justice League. The best-reviewed DC film is Wonder Woman to date.