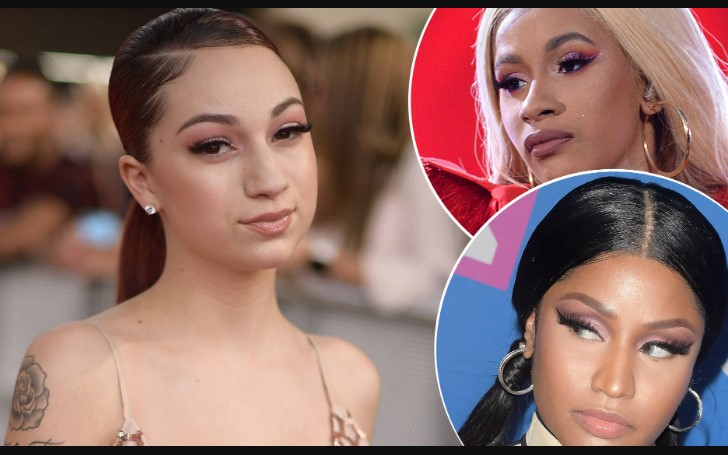 Bhad Bhabie did a oopsiee!

So, things escalated too quickly, following Bhad Bhadie's attempt to voice her frustrations about the general public's lack of understanding about the music industry.

Bhad Bhadie, whose real name is Danielle Bregoli, is an American rapper, who recently took to her Instagram and complained about the music industry, more precisely, rappers.

The 16-year-old rapper wrote, "Y'all just don't understand how this industry works. It's so sad. It's so upsetting because people put a lot of work into getting things done and then y'all hear, 'Oh, she didn't write that hook? Oh, well f*ck her.' What?"

The rapper continued, "Whether they actually gonna use it or not, sh*t still gets written. Even sometimes in sessions, artists will talk to their friends [to get advice]. That's how sh*t gets done. Sometimes it's a team effort."

Though the 16-year-old was only speaking her mind about how the music industry works, and how all the rappers use writers, a ghostwriter to be precise, and they all are unoriginal.

Bhad took many big names, the likes of Drake, Lil Wayne, including Nicki Minaj, who recently went public about her romance with Kenneth Petty, and that's exactly where Danielle knew she is in for some trouble now.

As soon as Barbz noticed Danielle mentioned Nicki who has a staggering net worth of $85 million, as one of the names on the list accusing her of using ghostwriters for their songs, fans lost it, and well, you pretty much know what happened next.

Bhad Bhabie faced a major backlash after she came with such a strong claim, the superfans went right in for the vengeance as they bombarded Bregoli with interviews where Nicki states she is the only rapper who writes her own rhymes.

After the backlash, the 16-year-old rapper took to her social media and tried to defend herself with stronger claims just to piss off Barbz more. Bregoli wrote, "I forgot that Nicki's fandom, the majority of them are brainwashed and braindead and just so in love with her that they believe anything she says."

Well, it's pretty clear, Bhad Bhabie is taking a stand for what she said on her social media, however, how true is all of this? Obviously, we don't want to be the next victim of Barbz, but, Danielle certainly has a point to an extent.

Well, there are interviews where Nicki, who defended her sex offender boyfriend, claiming she writes her own songs, maybe she is telling the truth, and Danielle just casually took her name to make a list more interesting. However, the case is, Barbz do not like what Bhad said!

But one thing for sure, the Barbz are on high alert always, and will defend their star no matter what!