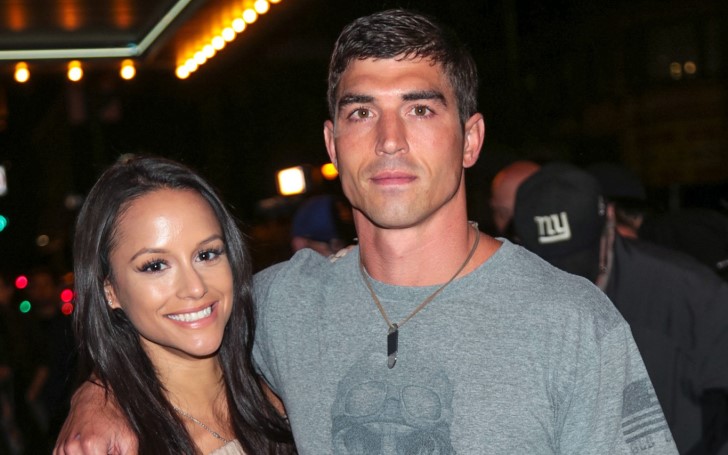 Big Brother Star Jessica Graf showed off her baby bump photo for the first time telling the Haters can SUCK IT!

The reality star got married to her partner Cody Nickson earlier this year in October. She and Cody both met on the CBS reality show.

In the published picture on Instagram, Jessica can be seen wearing a black full sleeved turtleneck top and a grey woolen pencil skirt holding a board that reads; I don't know about you but I'm Feeling 22.

By popular demand! My first bump photo 💕 I’ve had a lot of people ask me to post photos of my bump, and honestly, I’ve chosen not to because people online can be TROLLS! I’m very confident, and rude comments don’t bother me anymore. I’ve developed tough skin for it and I’ve also developed one hell of a “Blocked” list so I dont see most of it. The few rude comments I do see, Cody and I enjoy laughing at because the effort put in to hurt someone you have never mets feelings, it’s pretty pathetic! So I’ve avoided putting my bump photos online to avoid opening the door for body shaming. If you’re sitting there thinking, “Who would body shame someone who’s pregnant?” Congratulations. You’re a human who has common sense and A SOUL! Unfortunately, not everyone does and there will still be hate somewhere on this post! What made me change my mind and encouraged me to post my bump update was an individual I just started following, @sazan. She recently posted a very vulnerable photo of her 3 weeks postpartum. Seeing your body go through such drastic changes is hard and can sometimes take a hit to your confidence level! But I would rather be a woman like @sazan who inspires confidence than to avoid the issue all together! So to all my Mommas out there, you’re BEAUTIFUL and the haters can SUCK IT!

The reality TV star expressed through the post on why she held on so long on sharing her pregnancy pictures because of the trolls but later changed her mind.

Jessica revealed that there have been many trolls on the Internet who keep body shaming her many times. But she also stated she was motivated to share her baby bump pictures after she started following Sazan Hendrix on the same app.

The 27 years old was inspired by Sazan who also helped her gain confidence to avoid all the issues she faced from the trolls. Jessica also stated that she and husband Cody also share laughs when they read rude comments. In the caption, she stated:

"The few rude comments I do see, Cody and I enjoy laughing at because the effort put in to hurt someone you have never mets feelings, it's pretty pathetic!"

The lovely duo is expecting their first child in April next year. The couple also won $1 million Dollar after participating in The Amazing Race in February. The duo also revealed about wanting to start a big family to the show host Phil Keoghan.

You May Also Like: Dani Dyer and Jack Fincham Have Split Up After Four Months of Relationship

Date night with the wife...

However, for Jessica's husband Cody, this is not his first child. Cody Nickson already shares a daughter named Paisley from his previous relationship. Jessica announced their pregnancy news on Instagram on 24th September.