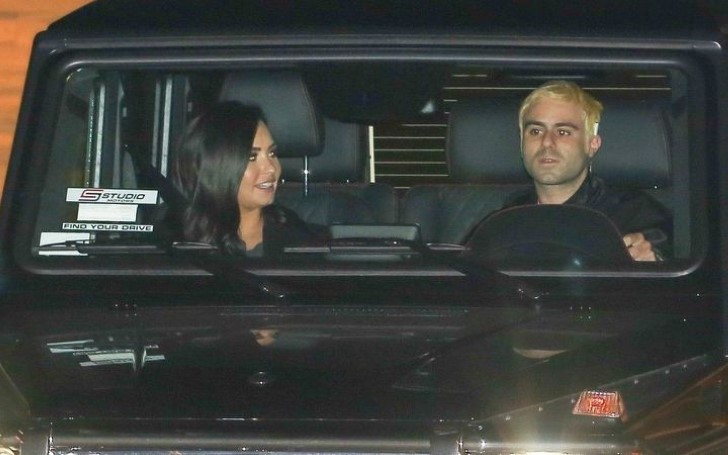 Out and about Demi Lovato shows PDA with new boyfriend Henry Levy after their dinner in Malibu.

Our favorite former Disney acts none other than Demi Lovato was recently spotted displaying kiss with her new love partner and potential boyfriend Henry Levy.

Not much since getting collapsed in her Los Angeles home due to a drug overdose, and having spent her following past four months in rehab, the Pop sensation was recently only seen in public for the first few times.

The new duo met each other in a rehab couple of years ago and lost contact afterward. But the pair somehow got close again in the recent weeks. Henry is also enjoying his sober life at the moment and takes it severely.

Accordingly, in the released pictures of the couple, both Demi and Henry can be seen wearing Black. The pair had their dinner in a Japanese restaurant and headed home whilst bleached hair Henry drove a black Mercedes.

The Stone Cold singer seemed healthy and happy too following her past months in rehab.

However, neither Demi nor Henry has commented anything on their relationship publicly. As per sources, Demi is currently focusing on her health and career and is staying away from anything that impacts her life negatively.

Do Read: Shawn Booth Spotted With Charly Arnolt After Splits From Kaitlyn Bristowe

Demi's new boyfriend, Henry is basically a fashion designer and the founder of Enfants Riches Deprimes which means Depressed Rich Kids in French.

Likewise, Henry was also admitted to a rehab when he was only 15 due to his drug addiction. Consequently, Henry has been open about his battle with drug substance.

Demi was previously in a relationship with actor Wilmer Valderrama.

The couple first met on the set of Voto Latino Presents: Be Counted Census back in 2010. Their dating endeavors began in May 2010 and lasted for six years before separating in June 2016.

In February 2018, the former flames were spotted showing some PDA during a lunch date. This sparked rumors of them getting back together.

Wilmer was also found helping Demi recover after she was hospitalized. However, the duo is just friends.

See Also: Dani Dyer and Jack Fincham Have Split Up After Four Months of Relationship

Earlier in July 2016, the news began surfacing of a reported fling between Demi Lovato and MMA fighter Guilherme "Bomba" Vasconcelos. They became Instagram official in January 2017. However, they were together only briefly as they broke up a few months later.

Prior to this, Demi dated MMA fighter Luke Rockhold in late 2016 before breaking up in December of the same year.

Furthermore, Lovato was rumored to have dated Trace Cyrus and Joe Jonas in 2009 and 2010, respectively.

Meanwhile, better health, new love partner and her second Grammy nomination. Looks like glorious days for Demi are ahead of her.

Demi and Henry were also seen last month in November leaving a restaurant but were told they were just friends at the time. May Demi and Henry find happiness together with their sober life.